Potomac Adjusts to Life with Snakeheads

Apparently, the once-feared snakehead is just another fish in the Potomac

It’s been 13 years since the snakehead, a.k.a. the frankenfish, was first found in the Potomac River. Initial predictions were dire, but during recent years it’s become clear that the snakehead is just another fish in the river.

The snakehead has not destroyed the Potomac River’s ecosystem as first predicted, and it appears that it’s coexisting with the other game fish in the river just fine. According to John Odenkirk, Virginia Department of Game & Inland Fisheries (VDGIF) biologist, the bass population in the Potomac River is better now than in recent years.

I interviewed Odenkirk regarding snakeheads in the Potomac River, and his interview, lightly edited, is below: 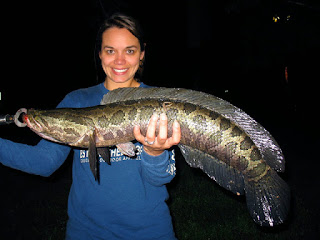 KA: Which section of the Potomac River has the densest population of snakeheads?

JO: The areas further downstream (away from D.C.), in newer colonized areas (with suitable habitat), generally will have higher numbers — these will usually be found in the back of tributary arms between Occoquan and Colonial Beach within both Maryland and Virginia. Areas closer to D.C. with higher numbers in Virginia are Aquia Creek (Stafford Co.) and the Occoquan River. 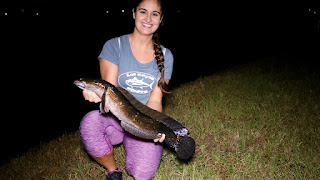 Mattowoman Creek on the Maryland side has a pretty health population too.


KA: During the past few years, has the population of snakeheads increased, decreased, or remained the same in the Potomac River? Has increased fishing pressure helped to reduce the snakehead population?

JO: Snakehead abundance increased dramatically after colonization, but trends suggest that increases in abundance may have slowed. Population estimates for Little Hunting Creek (tidal tributary of the Potomac River) declined each year from 2013 to 2015, supporting the assertion that northern snakehead density increases have slowed or that density has stabilized in some creeks.

So, after an initial burst when the fish first arrive, they settle into some equilibrium with the ecosystem. If you read much alarmist propaganda, "fragile" is an essential modifier to "ecosystem", but in fact, most ecosystems aren't


In the areas where they have been longest (e.g., around Mount Vernon), numbers seem to be declining in most Virginia creeks. I am fairly certain that a high level of exploitation (both commercial and recreational), which encompasses the huge increase in bow fishing, due to this fish, has helped suppress numbers.

KA: During the past few years, has the population of game fish, such as bass and walleye, increased, decreased, or remained the same in sections of the Potomac River which have snakeheads?

JO: We never see walleye in the Virginia portion of the tidal Potomac. This year, the largemouth bass population looks fantastic. On balance, the bass fishery has been better in the past five or six years than longer ago (during early phase of snakehead expansion). In short, it appears both populations are functioning completely independently of one another with no competition (plenty of forage to support both at current levels). 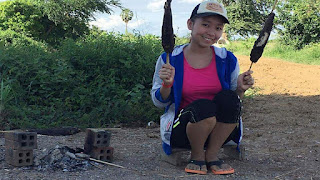 I'll bet the Bass enjoy them some little Snakeheads. And Blue Catfish, too!


KA: Snakeheads are fun to catch and are also delicious to eat. Is there a chance they will ever get reclassified as a game fish, with trophy citations awarded?

KA: What is the largest or heaviest snakehead documented to have been harvested in the Potomac River?

This, of course, was predicted long ago by my fishing guide friend Mike Starrett, of Indian Head Charters, who runs charter trips for  Snakeheads in  Mattawoman Creek, on the Potomac downstream a little bit from Washington D.C.  In fact, he's starting to complain that the bow hunters have reduced the population a bit too much.

Wombat-socho has "Rule 5 Sunday: Guns In The Desert" up and running at The Other McCain.
Posted by Fritz at 12:17 PM