Looks like it could catch fire again. Obamacare continues to consume itself as 41% of U.S. Counties Could Have Only One Obamacare Insurer Next Year and Recent Obamacare Insurer Exits Lead to 2 More Counties With No Choices, 100 more counties will have only one insurer operating.


The WSJ asks Why Didn’t ObamaCare Make Us Healthier?, and the Instapundit answers "IT WAS NEVER INTENDED TO: What ObamaCare did accomplish was to concentrate more more money and power in Washington — which is most everything you need to know about why it has proven so “difficult” to repeal." Let Consumers Repeal Obamacare. We're most of the way there already. 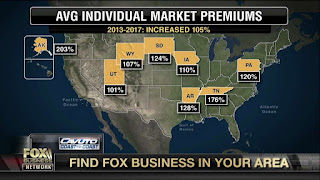 
Jazz Shaw: The Decline And Fall Of Obamacare And The AHCA:


So is the fight to repeal Obamacare pretty much over? Let me take a saw to the limb I’m currently sitting on and say… yes. But really, the fight was over shortly after the original Affordable Care Act was passed. There’s an old maxim in American politics which tells us that any entitlement program or other initiative which gives away goodies to the public, once in place, is pretty much there forever. There have been a few rare exceptions, but for the most part this is a tradition which is written in stone. 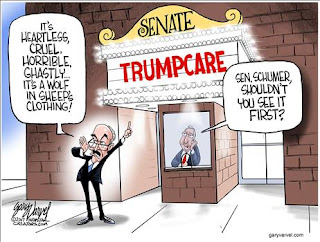 The only exception is to expand the entitlement, so democrats are pushing "single payer" aka socialized medicine as the cure.  Mark Levin: Obamacare ‘Here to Stay’ — Single-Payer ‘on the Way,’ GOP ‘Will Help Bring It In’. The sage of Omaha, Warren Buffett: Single Payer is the 'Best System for America, we can afford it". Maybe he can, but the State of California can't. Remember That California Single Payer Plan? Yeah… Never Mind.


But fear not, California, because I HAVE A PLAN. Your problems will soon be a thing of the past. You know how west coast liberals are always preaching the evils of giving “tax cuts to the rich” and how the wealthiest among us should pay their fair share? Surely that applies at the state level also. With that in mind, I invite any California legislators to steal this idea from me at no cost and introduce the “Movie Star Single Payer Subsidization Act of 2017.”

Under this bold plan, every Hollywood Star, Writer, Director, Producer or Studio executive who earns more than two million dollars in a single year will generously forfeit all income in excess of that amount to fund a single payer health care system for the state. On top of that, the movie studios will be even more helpful. The profits from all films which exceed 25% of the production costs will go into the same fund. Just working off the back of a napkin here it seems to me that they could recover a nice chunk of that $400B this year alone with room to spare.

Leaving them with $2 million a year seems pretty generous to me. Single-payer healthcare: if you think the pitch makes it too good to be true, you’re right

The CBO scored the Republican plan and determined somehow that their plan would result in 22 million people dropping out of the insurance market. Never mind that Obamacare never covered the 34 million or so that they originally promised, only 10 million give or take, so this number is completely bogus from the start, and any CBO estimates of people being covered should be discounted. Nevertheless, Some GOPs Vow 'No' on Moving to Healthcare Vote After CBO Score Released.

And how is that Senate bill faring? According to the estimable Megan McArdle, brought to you as usual via Wombat-socho's "In The Mailbox: 06.27.17", Senate's Obamacare Replacement Is a Suicide Mission. Republicans assume they’ll lose the next election anyway, so why not attempt to cut taxes while they can? From the Wombat's "In The Mailbox: 06.28.17". EBL: Dear GOP – Let Us Opt Out Of Obamacare and Power Line: Is The GOP Going About Health Reform Backwards? Given the GOP's history, that's a good bet. GOP & Health-Care Reform: Political Mistake Led to No-Win Situation  Do Republicans Even Remember Why Obamacare Should Be Repealed?  But the GOP agrees on one thing: ObamaCare taxes must go (annoying auto-ad at link).

The Party of No. Schumer Blocks National Security Briefing For Senate Committee

The rule that Schumer had invoked, which he has been exercising the use of over the past two weeks, blocks Senate committee business from happening two hours after the Senate convenes session for the day.  Schumer has consistently used the procedure as a way to delay business in Senate to make demands on Republicans on the health care bill.