Reason #5562 That Trump Was Elected

This, too, is CNN, the Counterfeit News Network: CNN Forced to Issue Correction After Comey's Written Testimony Refutes Report


CNN was forced to issue a correction Tuesday, after former FBI director James Comey's written testimony contradicted its damaging report about the president.

"The most trusted name in news" had reported that Comey was expected on Thursday to dispute President Trump's claims that Comey had told him on multiple occasions that he was not under investigation. 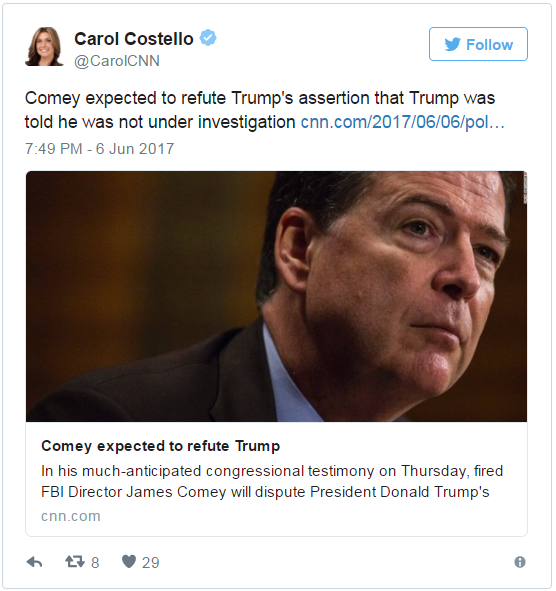 Unfortunately for CNN, in Comey's written letter, and subsequent testimony, he did admit to telling Trump three times that he was not under investigation:

"Prior to the January 6 meeting, I discussed with the FBI’s leadership team whether I should be prepared to assure President-Elect Trump that we were not investigating him personally," wrote Comey in his prepared testimony. "That was true; we did not have an open counter-intelligence case on him. We agreed I should do so if circumstances warranted."

I would be in favor of an office of a special investigator whose sole function was to investigate Presidents. However, the office should be started with the next change of administration.

Linked at Pirate's Cove in the weekly "Sorta Blogless Sunday Pinup" and links post.
Posted by Fritz at 11:39 AM