Reason #5564 That Trump Was Elected 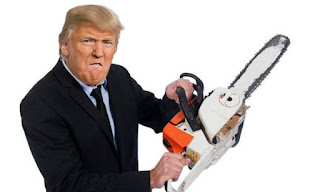 But Crews pointed out that in government, it takes a rule to kill a rule, so Trump's impactful new rules are likely much lower. "Since rule reductions look like rules, too, the reduction in regulation under Trump is more dramatic than what the raw counts can depict," Crews said.

From his report provided to Secrets:


Trump's mode so far is regulating bureaucrats rather than regulating the private sector, with rules to limit their rules. Even more importantly, more unswervingly than any other, the administration has incorporated regulatory dark matter into reforming the administrative state in both his freeze and the two-out requirement. This material consists of all the memoranda, guidance, notices, bulletins and other proclamations (including threats and bad publicity) with which bureaucrats create or influence policy, but that escape the (already inadequate) discipline of the 1946 Administrative Procedure Act. . . .

Regulating the regulators? Now there's an idea to embrace.
Posted by Fritz at 8:44 AM