Adam West, the ardent actor who managed to keep his tongue in cheek while wearing the iconic cowl of the Caped Crusader on the classic 1960s series Batman, has died. He was 88.

West, who was at the pinnacle of pop culture after Batman debuted in January 1966, only to see his career fall victim to typecasting after the ABC show flamed out, died Friday night in Los Angeles after a short battle with leukemia, a family spokesperson said.


West died peacefully surrounded by his family and is survived by his wife Marcelle, six children, five grandchildren and two great-grandchildren.

“Our dad always saw himself as The Bright Knight and aspired to make a positive impact on his fans' lives. He was and always will be our hero,” his family said in a statement.

After struggling for years without a steady job, the good-natured actor reached a new level of fame when he accepted an offer to voice the mayor of Quahog — named Adam West; how’s that for a coincidence! — on Seth MacFarlane’s long-running Fox animated hit Family Guy. 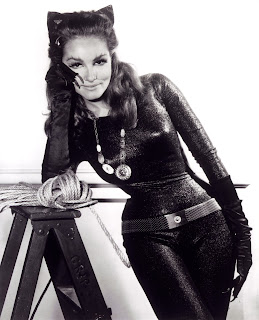 “The tone of our first show, by Lorenzo Semple Jr., was one of absurdity and tongue in cheek to the point that I found it irresistible,” West said. “I think they recognized that in me from what they’d seen me do before. I understood the material and brought something to it.

“You can’t play Batman in a serious, square-jawed, straight-ahead way without giving the audience the sense that there’s something behind that mask waiting to get out, that he’s a little crazed, he’s strange.”

I was a teenager, and Batman was fun. Not deep, but fun.

Wombat-socho came in a little late with "Rule 5 Tuesday: EDC Girls".
Posted by Fritz at 6:47 PM