James “Ooker” Eskridge was crabbing off the coast of Virginia’s Tangier Island in the Chesapeake Bay on Monday when he noticed a boat approaching him. Behind it was another.

Eskridge, mayor on the island, steeled himself for the worst. After all, as his wife said to him, “The only thing that could make you come inside from crabbing on a Monday morning is a call from President Trump.”

But as it turned out, that’s exactly what it was.

As one of the boats finally reached him, a fellow waterman told him to return to the island stat, because the president of the United States was calling soon.

“I thought he was joking,” Eskridge told The Washington Post in a phone interview.

Soon, he realized this was no joke. 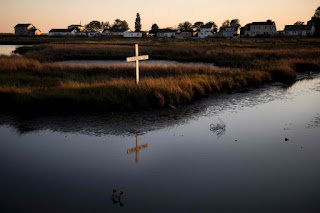 “I’m still coming to grips that I was talking to the president,” Eskridge said, before describing the call.

Trump thanked the mayor and the entire island of Tangier, where he received 87 percent of the votes, for their support. Then the conversation turned to the island’s plight.

Eskridge wasn’t offended. In fact, he agreed that rising sea levels aren’t a problem for Tangier. 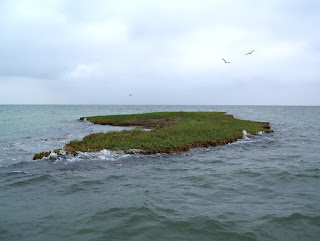 The President and Mayor are correct. The main threat to Tangier Island is erosion, which is eating the island at an alarming rate, as it has been eating the low lying lands of the Delmarva since the Bay first returned to it's full size at the end of the last glacial. While sea level is rising in the Chesapeake at ~3 mm a year, which salt marsh islands can grow to accommodate if not interfered with by burning or paving the marsh. That rate has not changed in the last 100 years, as would be expected if it were do to global warming:

On the other hand, erosion eats the islands from the edges, and that land cannot be regained without human intervention.


Currently, the Army Corps of Engineers is scheduled to begin building a jetty on the west channel of the island some time this year to protect it from the harsh currents. But Eskridge said they need a jetty, or perhaps even a sea wall, around the entire island.

He believes Trump will cut through red tape and get them that wall.

“He’s for cutting regulations and the time it takes to study a project,” Eskridge said. “Of course you need the studies, but we’ve been studied to death.”

“We’re running out of land to give up,” he added.

If it's valuable enough, humans will build it, like they have with Manhattan Island, which has grown despite equivalent sea level rise .