Reason #5568 That Trump Was Elected

Democratic civility bullshit, brought to you via Wombat-socho's "In The Mailbox: 06.14.17" and others.

As I'm sure almost all of your are aware (and where are the rest of you), yesterday, James T. Hodgkinson a Bernie Bro from Illinois, and a rabid fan of Rachel Maddow attacked a group of Republican Congressmen practicing for the annual Congressional baseball game, critically wounded House Majority Whip Steve Scalise critically, as well as wounding Congressional staffer Zachary Barth and lobbyist Matt Mika, and two Capitol Police officers, who ultimately killed the attacker.

Semi-responsible leftists, like Chuck Todd quickly shifted their stance from all violence being caused by right-wing hatred, to Kumbaya:

Hope most folks realize we have a toxic political culture and that attempting to exploit today for political gain will only poison us more
— Chuck Todd (@chucktodd) June 14, 2017

Applaud #Alexandria shooter....time for NRA bitches in GOP to get a taste of rest of America. Too bad they have healthcare.
— Trump is Satan (@LeftWingMilitia) June 14, 2017

No sympathy for scum who try to kill millions by taking away their healthcare. People get shot everyday B. Steven Scalise has insurance.
— Caramel Atheist (@CaramelAtheist) June 14, 2017

Ann Althouse notes A good turn of phrase by Scott Adams. The Alexandria shooter was "radicalized by mainstream media."

The Daily Caller catches the Washington Post turning their back on a Liberal WaPo Analysis Writer, Budding Author Deletes Heinous Tweet About Shooting 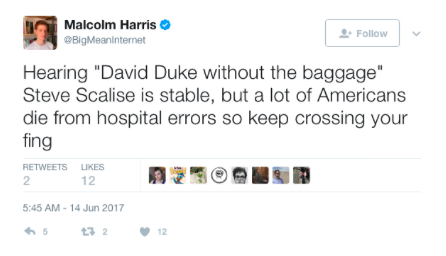 On Friday, The Washington Post featured Harris in its “PostEverything” section. The New Republic featured a story by Harris in August, 2016. Salon has also published his work. The story says he works for The New Inquiry. The New Inquiry site describes Harris as a “writer and editor living in Brooklyn and lists a slew of his work, the most recent of which is July 6, 2016.

Harris is the author of Kids These Days: Human Capital and the Making of Millennials, which is allegedly being published by Little, Brown. In his Twitter bio, he says he’s a full-time staff writer for Vox.

But there is strangely no mention of him anywhere on the site.
. . .
UPDATE: WaPo and Vox PR both wrote The Mirror to severely distance themselves from Harris. WaPo says he contributed one story. Vox says he is not a Vox employee as he claims to be in his Twitter bio. I will cover this in more detail in an upcoming story.

Linked at Pirate's Cove in the weekly "Sorta Blogless Sunday Pinup" and links.
Posted by Fritz at 7:29 AM