HTF Did This Happen? 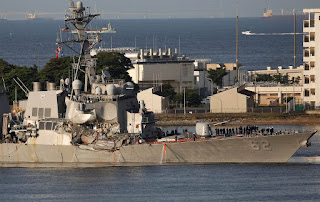 7 U.S. Sailors Unaccounted for After Navy Destroyer Collides With Ship Off Japan

Seven U.S. sailors are unaccounted for after a Navy destroyer collided with a merchant ship southwest of Yokosuka, Japan, early Saturday local time, the Navy said. 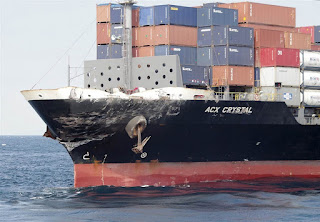 The ship, which had experienced some flooding after the collision, was tugged back to Yokosuka Naval Base, south of Tokyo, early Saturday.

The U.S. Navy said damaged areas of the ship will also be searched for the seven unaccounted-for sailors after the ship is safely docked.

"Right now we are focused on two things: the safety of the ship and the well-being of the Sailors," Adm. Scott Swift, commander of the U.S. Pacific Fleet, said in a statement. "We thank our Japanese partners for their assistance."

I know it was night time, but ships these days have radar, and lights and all.

It looks like the Fitzgerald was hit broadside by the bow of the ACX Crystal, and took the brunt of the collision. I guess they don't call them "tin cans" for nothing.

Hoping the best for the missing sailors.
Posted by Fritz at 7:39 AM