Showdown at the Spotted Owl Corral 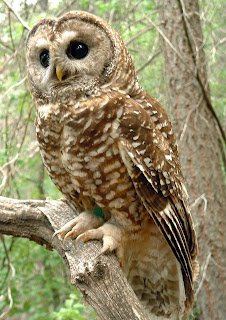 Spotted owl could be game-changer in Tombstone water war


Tombstone is trying to repair a 26-mile pipeline that has brought mountain spring water into the city since 1881. It was damaged during last summer's Monument Fire and monsoon rains that brought mud, water and boulders crashing down the denuded slopes.

The Miller Peak Wilderness Area, where owls nest in the trees above Tombstone's pipeline, was hit particularly hard. Sections of pipeline simply vanished, and Tombstone's reservoir ran dry by August.

Kevin Rudd, project manager for the Tombstone pipeline, said the repaired pipeline needs to be shored up or it surely will be washed away when the monsoon rains return next month. Planned tasks for the shovel brigade include reinforcing the spring and diverting its flow by using boulders, sand, downed trees and other flood debris.

As for the owl, nobody could say for certain after the fire whether it would return. But it's the big reason why the Forest Service wouldn't simply hand Tombstone a permit to use heavy construction equipment to fix the pipeline. Tombstone responded by taking the feds to court. Since then, the conflict has escalated, taking on a life of its own.

Tombstone now asserts that it owns 25 springs in the Huachuca Mountains and shouldn't have to ask anyone for permission to maintain its own water line. The Forest Service says Tombstone holds permits for just five springs, and it argues the city is trying to exploit a natural disaster to expand its water system.

Can you imagine the federal government denying water to Washington D.C. because it's pipeline might impact a single pair or endangered birds? If so, I'll help you look for them.

"What is more important, owls or the people of Tombstone?" James Upchurch, a Forest Service supervisor who oversees the wilderness, was asked in court earlier this year.

Upchurch responded that there was no easy answer, which left jaws dropping on Tombstone's side of the courtroom.

So far, the Forest Service had been winning in court; Tombstone's request for an emergency injunction went all the way to the U.S. Supreme Court but was turned down.

Owls vs. people; why choose when you can have neither?


The Forest Service granted permits Thursday for the city to bring the all-volunteer shovel brigade into the canyon to shore up the pipeline. Tombstone has until 8 p.m. Saturday to finish the job.

And so, under an unforgiving desert sun, about 100 people -- including Old West cowboy types with monikers such as "Whiskers" and "Cowboy Doug" -- gathered at Tombstone's old high school football field Friday for the first day of an event that was billed as part protest and part work party.

That's mighty generous of them. Allowing them to fix their own water system as long as they do it with primitive tools.  Who says the Federal government wants to take us back to the stone age; that's at least iron-age technology.

I would suggest that head of the Forest Service should order all the employees in the region to work on the project for free on their day off. I know for a fact federal supervisors have that authority...