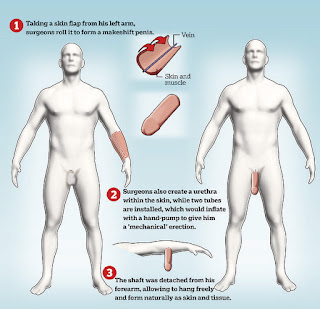 Found at Hot Air under the generic title "Dude", from Da Mail, Father whose penis dropped off due to a blood infection became the first man to have a new one built on his arm - but delays mean it has been stuck there for four years


A father whose penis dropped off due to a blood infection became the first man to have a new one built on his arm - but delays mean it has been stuck there for four years.

Malcolm MacDonald, underwent a £50,000 NHS-funded procedure to have the appendage attached to his arm, after a long-term perineum infection caused his penis to turn black and fall off in 2014.

He told The Sun how he became a recluse and turned to alcohol after losing his manhood, but has found hope after pioneering surgery meant he could have 'Jimmy,' as he calls it, attached to his arm, in the hope one day it could be moved back between his legs.

A £50,000 NHS procedure saw Malcolm have a penis grafted to his arm, but four years on it has not been moved to his groin.

The 45-year-old mechanic from Norfolk told the paper: 'Of course it is mad - having a penis on your arm. Not even I am used to it. But when you think about it, it's actually amazing.'

Which, in turn reminded me of a SciFi short story I read years ago, probably as a teenager, about a man exiled on a planet named Sheol, where you would grow parts that would be cut off for medical use. Since you can find anything (almost) on the internet, a quick search turned up the Wikipedia entry for A Planet Named Shayol (yeah, I spelled it wrong, but it still found it).


"A Planet Named Shayol" is a science fiction story by American writer Cordwainer Smith (the pen name of Paul Linebarger). Like most of his science fiction work, it takes place in his Instrumentality of Mankind setting. It was first published in Galaxy Science Fiction magazine in October 1961.

The protagonist, Mercer, who lives within the Empire, has been convicted of "a crime that has no name". He is condemned by the Empire to the planet Shayol, in which he lives in a penal colony whose inhabitants must undergo grotesque physical mutations caused by tiny symbiotes called dromozoans. Most grow extra organs, which the Empire harvests for medical purposes. The bull-man B'dikkat administer the prisoners drugs to alleviate the pain of their punishment and from their surgeries. . .

1961? I'd have been 10, I might have seen it in an anthology, but I did have a subscription to Galaxy I think? Anyway, thanks to Gutenberg, you can read the whole story on line here. It's pretty short.

So, are we ready to start forcing prisoners to grow parts for people yet?
Posted by Fritz at 7:24 PM