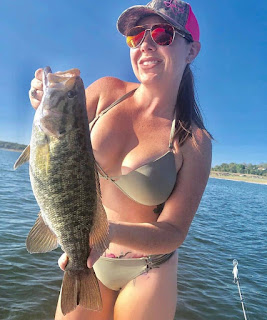 Washington, DC is an important landmark in many ways. It’s our nation’s capital, the largest population center in the Potomac River region, and the point where our river changes from freshwater to tidal. It’s also the border between the habitats of two different, but beloved, bass species.

Many non-anglers have heard of the largemouth bass (or at least of Big Mouth Billy Bass, the singing robot fish…) that lives in the tidal waters below Great Falls, but fewer know of the ever-so-slightly smaller-mouthed species that dominates sport fishing in our fresh, upstream waters.

It’s time to pay attention to the smallmouth bass (Micropterus dolomieu). Recreational fishing for smallmouths in the upper Potomac River is a $23 million a year industry. Now, the fish and all that it represents are threatened by the climate crisis.

Let’s look up-river to see how we can help save this indispensable local legend…
Small mouths, big deal

You don’t have to be an avid angler to care about the smallmouth bass. Their maxillaries (a.k.a. upper jaw flaps, a.k.a. mouths) may be small, but their charm, and impact, are huge.

Smallmouths aren’t native to the Potomac River, but they aren’t invasive or harmful. Originally from the Upper Mississippi River, Great Lakes, and St. Lawrence River systems, smallmouth bass have been introduced to many rivers throughout the world. They were first brought to our region “in 1854 when a B&O railroad employee brought 20 fish from the Wheeling River in West Virginia to the C&O Canal Basin in Cumberland, Maryland” (MD DNR). They are now an established part of the ecosystem in the Upper Potomac River and South Branch Potomac River. 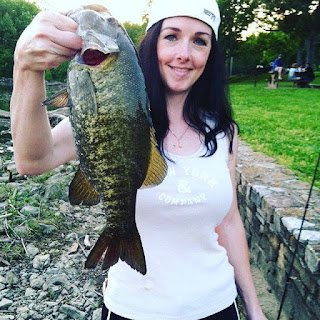 Invasive is rather in the mind of the beholder. If you like it, it's an introduced delight; if you don't it's a terrible invasive species which spells the doom of countless native species that it eats and or competes with. I'm OK with Smallmouth, but that doesn't mean they didn't bring changes to the ecosystem that might have been disastrous for some native species.

They build nests! Like other members of the sunfish family, smallmouth bass build nests in order to reproduce. The males build the saucer-shaped nests in the the sand, gravel, or rubble, usually within 150 feet of where he built his nest the previous year. Then the mating pair perform their “spawning ritual” above the nest, after which the female leaves (often to spawn with another male…) and the male stays to guard his eggs.

Healthy smallmouth bass = clean water. Like many of us, smallmouth bass are picky about where they live. They like cool, clear streams with moderate currents and clear lakes. Cool and clear are the key words, these fish can’t tolerate high temperatures or pollution. That means they’re an excellent indicator of when our streams and rivers are healthy - and when they’re not.

Solving the mystery of the smallmouth

One thing is certain when it comes to smallmouth bass conservation - the species, and the fishery it supports, is in jeopardy. But why? Smallmouth bass reproduction in the Potomac River has been declining since 2007, but the cause has been unclear until recently.

There are lots of threats to our local ecosystem that are undoubtedly affecting bass - invasive catfish and snakeheads outcompeting them for prey, chemical runoff like pesticides and fertilizers compromising their immune systems, and outbreaks of blue-green algae to start - but none of these seem to be the culprit behind the flagging population. 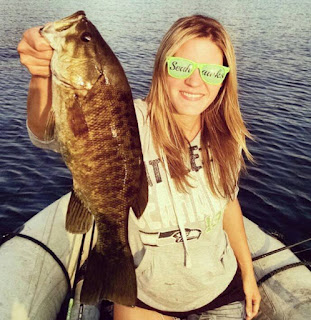 Since, as far as I know, snakeheads have not been a problem above Great Falls, it would be unfair to blame them for harming the Smallmouth Bass.


Climate change is the real criminal, according to a new study by the U.S. Geological Survey’s Leetown Science Center in West Virginia and the Maryland Department of Natural Resources. Specifically, the increased rainfall caused by a warming planet is leading to flooding and heavy river flows that ruin the reproductive chances of smallmouth bass.

Average precipitation has been increasing in the Chesapeake Bay region for 100 years and more and more of that precipitation is coming from intense storms. Furthermore, springtime water flow in the Potomac has increased 4.3% every decade from 1970 - 2010.

Smallmouth bass spawn from April - June, ideally in waters between 58 to 70°F. Flooding and violent water flows in late spring and summer scour their eggs from the carefully built nests we mentioned above and disperse them into areas where the sensitive fish stand a much lower chance of survival. Increasing local temperatures aren’t helping their reproduction either.

Spring storms are threatening other local fish species as well. According to the same study, 13 of 28 species monitored in the Potomac over the past 43 years experienced declines in abundance seemingly related to increased springtime river flows.

So that means 15 of 28 species are either doing as well or better than they were 43 years ago. And why 43 years? I suspect the starting date is used to fix the data to make the trends stronger. Call me paranoid; it's a common trick in climate "science."

You do know that our weather goes through long term-multidecadal  cycles, specifically, the Atlantic Multidecadal Oscillation, and it's rather premature to look at changes in rainfall as significant over a time period less than about 2 cycles, or around  160 years...

The AMO is correlated to air temperatures and rainfall over much of the Northern Hemisphere, in particular in the summer climate in North America and Europe.Through changes in atmospheric circulation, the AMO can also modulate spring snowfall over the Alps  and glaciers' mass variability. Rainfall patterns are affected in North Eastern Brazilian and African Sahel. It is also associated with changes in the frequency of North American droughts and is reflected in the frequency of severe Atlantic hurricane activity.

Recent research suggests that the AMO is related to the past occurrence of major droughts in the US Midwest and the Southwest. When the AMO is in its warm phase, these droughts tend to be more frequent or prolonged. Two of the most severe droughts of the 20th century occurred during the positive AMO between 1925 and 1965: The Dust Bowl of the 1930s and the 1950s drought. Florida and the Pacific Northwest tend to be the opposite—warm AMO, more rainfall.

I rather suspect any change in flooding has more to do with land use, as ag fields, urban and suburban land give up their water much faster than the native forests.

Wombat-socho has Rule 5 Sunday: Toni McBride ready at The Other McCain.