Humans have partnered with sled dogs for 9,500 years

To an owner, every dog is special. Maybe your Beagle is brilliant, or your Goldendoodle is hilarious. But some dogs have traits that make them shockingly unique, and not just in their owners eyes—traits that date back thousands of years.

One example is sled dogs, or modern-day huskies and malamutes. These big, fluffy animals make incredible pets and have a history of transporting people across barren, icy landscapes for thousands of years with the help of special heat-regulation and fat-digestion traits. And according to a new study published last month in Science, they may be one of the oldest unique dog types that have sniffed, barked, and run across the earth. The finding could help us better understand all kinds of modern sled dogs, and help keep them from going extinct in our rapidly warming world. 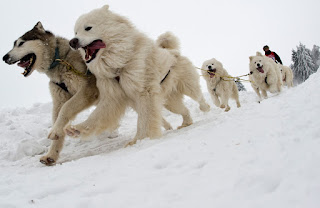 Sled dogs have a rich history alongside groups of people, like the Inuit, that have thrived in the coldest corners of the earth for thousands of years. Mikkel Sinding, the author of the study and an evolutionary geneticist at Trinity College in Dublin, says that up until recently, experts have thought that the sled dog type had co-evolved with the Inuit people two or three thousand years ago. But as it turns out, these pups have a longer history than anyone thought.

To nail down the timeline, researchers sequenced genomes from various dog bones—the oldest being around 9,500 years old, unearthed in the shivery depths of Siberia. They also sequenced DNA from 10 modern-day Greenland sled dogs and a 33,000-year-old Siberian wolf. What they found was that the ancient canine had a lot more in common genetically with the modern-day dogs than the wolf. This hints that this specific group of pup branched off from other dogs around 10,000 years ago, specifically to help usher their human companions all across the globe. 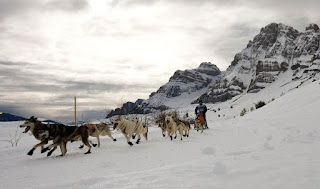 “People used to walk all over the earth until one day, someone got this brilliant idea,” says Sinding. “Somebody can pull me on this [sled], and that is an invention or even technology.”

If we flash back to when that would’ve been, it’d be around the same time that mammoths were dying off, and the ice age was ending. So as the world was changing, humans used their puppy companions to get from point a to point b, sometimes carrying loads as hefty as a polar bear on the sleds behind them. 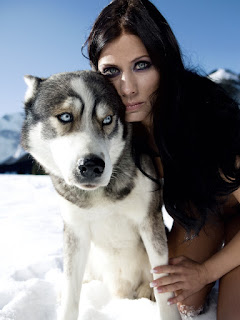 Another big question answered by the genomic discovery is just how different a modern rough-and-tumble sled dog might be from a pretty poodle or a pouty pug. There are three big genomic adaptations that made sled dogs into transportation powerhouses, says Elaine Ostrander, a comparative geneticist who does research on dog breeds for the NIH.

First off, sled dogs have a high tolerance for eating fats and blubber, whereas our at-home pets mostly munch on carbs. Too much fat for a dog, or person, who lives in temperate climates could mean serious heart disease, she says. Up in the icy wilderness, grains and wheat aren’t exactly common. So sled dogs, much like polar bears, have adapted to eat blubber and fat without the heart health complications. 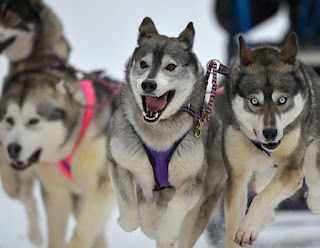 OK, I suggest that they have this the wrong way around. Wolves certainly don't have much in the way of carbs in their diets, and until mankind developed agriculture, approximately 10000 years ago, and it spread widely, neither did dogs. Dogs outside the arctic have since evolved to use carbs better than wolves or the dogs in the arctic, where a reliance on wild game or herded animals in their diet remained the dominant food.


The second wild thing about these animals is their ability to control their body temperature in a way that our pups at home might not be able to. If you’ve ever noticed that a husky can be extremely fluffy but still able to keep it’s cool, it’s because its fur is double-coated. That allows it to keep extreme temperatures at bay (which also means, for heaven’s sake, never shave your husky even in the hottest of summers).

If a dog is going to be running in freezing temperatures for long periods of time, regulating their body heat is crucial. But on top of that, sled dogs are also adjusted to hypoxia, says Ostrander. “Their job is to run, and if they run hard enough and long enough they are oxygen-deprived,” she says. That’s where the third adaptation comes in. 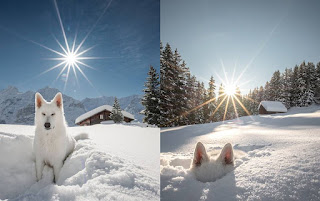 After sprinting across a distance, whether it’s in track practice or to catch up with the ice cream truck on a hot day, you’ve probably noticed you’ll need a moment to catch your breath. For dogs that run and run and run, they’ve got to find a solution, which in this case would be developing genes that would allow them to survive even when they are running low on oxygen. People and animals that live at extreme altitudes have adapted to withstanding a low oxygen level that comes along with a mountainous lifestyle. While these dogs aren’t climbing the Himalayas necessarily, they similarly have adapted to a lifestyle where constant strenuous activity doesn’t make them feel as sick or exhausted as it would make other animals who aren’t as used to sledding for hours at a time. 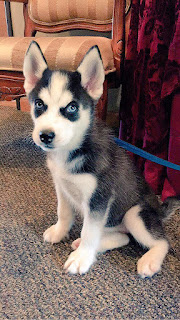 Another recent interesting study regarding the dog/husky relationship: The evolution of puppy dog eyes


New research comparing the anatomy and behavior of dogs and wolves suggests dogs' facial anatomy has changed over thousands of years specifically to allow them to better communicate with humans.

In the first detailed analysis comparing the anatomy and behavior of dogs and wolves, researchers found that the facial musculature of both species was similar, except above the eyes. Dogs have a small muscle, which allows them to intensely raise their inner eyebrow, which wolves do not.

The authors suggest that the inner eyebrow raising movement triggers a nurturing response in humans because it makes the dogs' eyes appear larger, more infant like and also resembles a movement humans produce when they are sad. 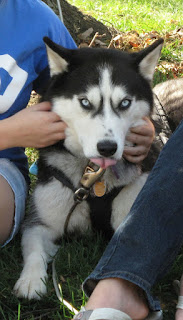 The research team, led by comparative psychologist Dr Juliane Kaminski, at the University of Portsmouth, included a team of behavioural and anatomical experts in the UK and USA.

It is published in the journal Proceedings of the National Academy of Sciences (PNAS).

Dr Kaminski said: "The evidence is compelling that dogs developed a muscle to raise the inner eyebrow after they were domesticated from wolves. "We also studied dogs' and wolves' behavior, and when exposed to a human for two minutes, dogs raised their inner eyebrows more and at higher intensities than wolves.

"The findings suggest that expressive eyebrows in dogs may be a result of humans unconscious preferences that influenced selection during domestication. When dogs make the movement, it seems to elicit a strong desire in humans to look after them. This would give dogs, that move their eyebrows more, a selection advantage over others and reinforce the 'puppy dog eyes' trait for future generations

The exception to the rule?


The only dog species in the study that did not have the muscle was the Siberian husky, which is among more ancient dog breeds.