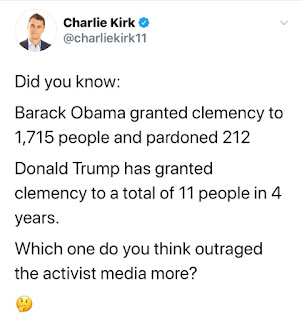 And still in the news, as lefties and never-Trumpers continue to fulminate. The AP whines Trump’s defiant help for Stone adds to tumult in Washington. The editors of the never-Trump National Review call it An Indefensible Commutation. DNYNUZ moans Trump’s Clemency Came After Displays of Loyalty by Stone. Andy Weissman Wants Roger Stone Hauled Before Grand Jury in New York, (Law and Crime), while the trial judge Amy Berman Jackson is looking for a loop hole in the commutation,  Stone Judge: I Need To Review Trump’s Commutation (Capt. Ed, Hot Air). Chris Christie says I wouldn't have commuted Roger Stone sentence. You're also not the President, after several attempts.

Meanwhile Roger Stone continues his plan to drive libs batty as he Says he plans to campaign for Trump. I would say he has succeeded. At Red State, "shipwreckedcrew" tells of how David French Reveals The Depth Of Intellectual Dishonesty Needed For The NeverTrumpers’ Vituperation of Roger Stone. Well, somebody has to read what David French writes, I suppose. Better him than me. 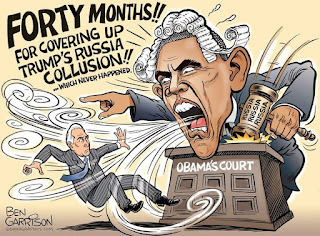 George Papadopolous tells an innocuous “half-truth” by providing an inaccurate date, and he’s forced to eat a “false statement” charge. Why? He was a Trump campaign advisor.

Gen. Michael Flynn omits information from answers to FBI agents, and he’s forced to eat a “false statement” charge. Why? He was Trump’s National Security Advisor.

Roger Stone is convicted for lying to Congress where his “lies” are almost exclusively related to covering up the fact that he had not been honest with Trump and campaign officials about a connection to Assange and Wikileaks — he had none — and the SCO seeks an 87-month sentence. Why? Because he’s been a 30-year friend and advisor to Trump.

Jerome Corsi is none of those things. Even though his lies to the SCO are set forth in the Report, and he’s given a plea agreement to sign but he refuses to do so, and the SCO drops the matter rather than indict him.

If you want proof of a “two-tiered” justice system under the SCO, there it is. If there was narrative value in nailing your scalp to the wall, the SCO did it — even when they knew they could not prove the underlying crime — Gen. Flynn. When there was no narrative value, they dumped you off on the nearest street corner with cab fare to get you home.

Via Powerline, Two Standards of Justice:

Press Sec. Kayleigh McEnany: "There really are two standards of justice in this country." pic.twitter.com/ASbT6g2NCx
— The Hill (@thehill) July 13, 2020

Remember, as John Solomon at JTN reminds us, Michael Flynn bombshell: FBI believed he was 'forthcoming' and 'telling truth,' notes show and yet Weissman and his band of liberal lawyer thugs forced him to plead guilty by bankrupting him and threatening to put his son in prison.


FBI agents told senior DOJ officials at a Jan. 25, 2017 meeting that Flynn was “telling truth as he believed it” and that he "believe[d] that what he said was true," according to handwritten notes taken by then-Deputy Assistant Attorney General Tashina Gauhar that were belatedly turned over to Flynn's defense this month.

The agents also believed Flynn was “being forthright” during his interview and simply didn't remember some facts from his calls with the Russian ambassador during the post-2016 election transition, Gauhar wrote in the notes. A separate DOJ memo described Flynn as "very open and forthcoming" during the interview.

You can read the notes here:

Copies of the notes from Gauhar, former FBI agent Peter Strzok, who led the Russia collusion case, and former DOJ and FBI official Dana Boente were made public in a court filing over the weekend, adding to a large body of belatedly released evidence that suggested the FBI did not believe it had grounds to charge Flynn with a crime as news media were reporting at the time.

In fact, Boente stated in handwritten notes dated in March 2017 that the FBI had concluded Flynn wasn't an agent of Russia. "Do not view as source of collusion," Boente wrote.

Likewise, the notes show DOJ did not believe it could prosecute Flynn under the Logan Act, lone of the laws that was leaked as a possible Flynn liability in the media. "No reasonable pros to Logan Act," one of the entry in the notes declared. The notes also confirm previously released evidence showing the FBI planned on Jan. 4, 2017 to close down its investigation of Flynn but then reversed course.

Remarkably, the FBI claimed to DOJ the reason it kept the Flynn probe open and interview him was because a news media leak of a classified transcript of his call with Russian ambassador Sergey Kislyak.

A leak that someone in the FBI or DOJ likely initiated.


Among other things, following trial, the London court has found elements of the Steele Dossier false and defamatory as to two plaintiff Russian oligarchs. We may have the makings of a Robert Ludlum novel here. Call it The Steele Defamation.

The London case barely scratches the surface of the dossier’s defamatory falsehoods. Moreover, the London court’s findings do not exactly come as a shock to those of us who have been following the biggest scandal in American political history. The basic facts of the case have long since been established in other proceedings here.

Solomon’s story nevertheless draws attention to their corroboration in the case brought against Steele in London. The court’s lengthy Approved Judgment is posted on Scribd. It includes an award of £18,000 in damages to each of two plaintiffs.

The Wall Street Journal is among the media that have noted the London court’s judgment. This was Steele’s defense, according to the Journal: “Mr. Steele has argued that he compiled the dossier and circulated it to a limited audience, but never intended for its publication in full by the website BuzzFeed.” It’s almost funny.

Among other media that took note of the court’s judgment are FOX News, Bloomberg News, and the Washington Examiner. I can’t find any notice taken by the New York Times or the Washington Post.

At every step along the way, the Times and the Post acted as co-conspirators with the perpetrators of the collusion hoax inside the Clinton campaign, the FBI, and the Obama administration. You can understand why they might not be inclined to look back or confess and repent their wrongdoing. They look forward to the Biden Ministry of Truth depositing it down the memory hole.

Jon Swan at Axios is pissed, Scoop: How the White House is trying to trap leakers, thereby threatening their business model.


President Trump's chief of staff, Mark Meadows, has told several White House staffers he's fed specific nuggets of information to suspected leakers to see if they pass them on to reporters — a trap that would confirm his suspicions. "Meadows told me he was doing that," said one former White House official. "I don't know if it ever worked."


. . .That’s why the first rule of Mole Hunt Club is not to talk about Mole Hunt Club. So why is Meadows being “unusually vocal” about it? Two reasons come to mind. Meadows wants to disincentivize leaking internally, of course. However, he might also want to reduce or eliminate any credibility leakers have with their contacts in the media. After all, reporters don’t want to get caught with their pants down passing along false information, especially if it’s easily disproven.


Jeff Sessions was an abject failure as U.S. Attorney General. After spending two years targeted by a fraudulent special counsel investigation as a result of Sessions’ recusal; there will forever be a strong dislike by President Trump toward Jeff Sessions..

For those who have forgotten just how bad it was, it’s worth revisiting Jeff Sessions testimony to congress (November of 2017) when he admitted there were approximately ten ongoing investigations -that he knew of- that he was recused from.