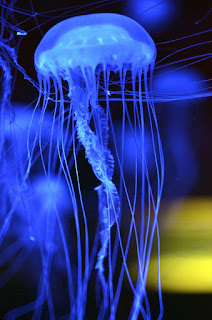 
If you swim in the Chesapeake Bay, you may encounter more sea nettles than in recent years. The sea nettle can cause a painful sting when encountered. Sea nettles were very plentiful in the 60s and 70s and were so thick at one time that most swimming ceased from early July until the water cooled in early September.

This year bay temperatures are warmer than usual resulting in more sea nettles which thrive in warm water. The surface temperature on some of the creeks on the Eastern Shore is approximately 90 degrees. Sea nettles can also appear on the seaside, although it is rare.

Sea nettles do provide ecological benefits to the bay. They consume large amounts plankton preventing it from growing too thick and smothering oyster beds and causing other damage.

If you encounter a sea nettle, one traditional remedy is to apply meat tenderizer to the sting area. Also baking soda may neutralize the effects of the sting. While sea nettle stinger contain a small amount of poison, it is not enough to cause any harm other than irritation of the skin. Most sea nettle stings disappear within about 30 minutes.

I like to tell people there's a sure cure for Sea Nettle stings; 1 hour.

Two years ago, we had an incredibly wet spring and summer, and the Sea Nettles never showed up. I might have seen two all summer long. We were hoping against hope that the fresh water would kill all the polyps that generate the adult nettles, and we would bet a break. Last year they were moderate, coming in late and dying out early. This year they started early (mid June) and are still going strong. Even if you don't go in the water you risk slipping on stranded jellies. Some days are worse than other; without knowing too much, I suspect that east winds tend to drive them across the surface of the water, into the shallow water on our side and the tides strand them on the shore.
Posted by Fritz at 4:07 PM