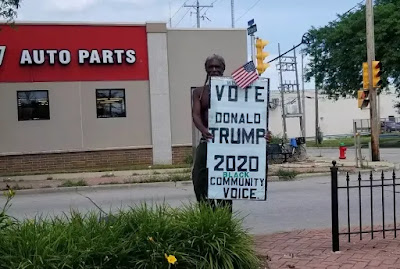 A black Trump supporter who was well known in his community for standing on street corners with "Vote Trump" signs as well as signs plastered with Bible verses was killed in broad daylight in Milwaukee's Riverwest neighborhood Thursday afternoon.

Bernell Tremmell, 60, was shot in front of his business, Expression Publications, at 911 E. Wright. The building is covered in handmade signs, the most prominent of which read "Vote Donald Trump 2020," and "Re-Elect Trump 2020." Law enforcement sources tell "The Dan O'Donnell Show" that it is impossible to know the motive for the shooting since the suspect is not yet in custody, but detectives are investigating the possibility that Tremmell was killed over his political beliefs.

He had spent the past few weeks advocating for Trump's re-election in his neighborhood and in front of City Hall in downtown Milwaukee and engaged people who would react to his message.

"I had an interaction with him last Saturday across the street from Walmart on Capitol Drive," said one woman who did not wish to be identified. "It was the second time I had seen him with his Trump sign and I pulled my car over to chat with him. What a nice, friendly man! We chatted for several minutes, and I told him I was proud of him and he’s very brave to put himself out there so visibly as a Trump supporter!"

Law enforcement sources tell "The Dan O'Donnell Show" that the suspect rode up to Tremmell as he sat in front of his business, shot him and then rode away. That suspect is still on the loose. Anyone with information about the shooting is urged to contact the Milwaukee Police Department.

I'm not saying he was killed over his politics, but these days, with the intensity of hatred toward Donald Trump on the left, it certainly should be an avenue of the investigation.