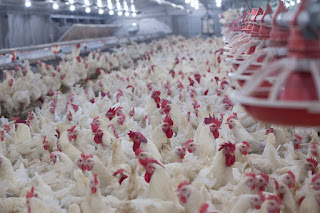 
An air quality monitoring project looking at the impact of poultry operations on surrounding residential areas has released its first data about the lower Eastern Shore.
The data indicates that airborne substances of concern are higher near high concentrations of poultry farms, but the measures are far below recommended limits.

The project is a joint effort by the Delmarva Poultry Industry, Inc. — an industry advocacy group — and the Maryland Department of the Environment, which is in charge of collecting and publishing all data. The project also has monetary support from the Keith Campbell Foundation for the Environment.

The network of ambient air monitoring stations is the first project to compare ambient ammonia levels on the Eastern Shore to those in the city of Baltimore, according to DPI. The project's aim is to collect data on residential air quality in the vicinity of poultry operations.

"The launch of this data-gathering effort reflects the chicken community’s firm commitment to transparency and to being a good neighbor,” said Holly Porter, executive director of DPI, in a statement. “We share with all Marylanders an interest in better understanding how farms, suburbs and denser cities can coexist on the Eastern Shore, and this ambient air monitoring network furthers that understanding."

No doubt disappointing people who want to further regulate the chicken farming on the Eastern Shore.
Posted by Fritz at 3:47 PM