What's New With the WuFlu?

It's a blazing hot and muggy day here, 95 F or more and my daily drag with Skye was a short walk in the neighborhood, staying in the shade of trees as much as possible. This leaves me with much time to do something with all the links WuFlu links that are accumulating.

The big question of the week, perhaps the month, should the kids go back to physical school in fall, or do we continue with half-assed distance learning, or some hybrid model? Certainly, younger children rarely catch the disease, and when they do, it's very rarely serious. German study finds no evidence coronavirus spreads in schools, but a second wave in Israel is being blamed partly on schools being reopened.   Older children may catch it more, but rarely suffer significantly, but according to this NYT article, may spread it as well as adults.   American Council on Science and Health, Coronavirus: COVID Deaths Among Children And Reopening Schools


The risk to students of reopening schools is quite small. For instance, more young adults aged 15-24 will drown than die from coronavirus. The challenge for re-opening schools is the risk posed to teachers, staff, and students' families.

Therefore, sending  kids back to school is no significant threat to the children, but might present a threat to the teacher.  At Bacon's Rebellion (which I recently added to the blogroll) James C. Sherlock agrees, after considering the issue in School Opening Variances Are a Civil Rights Issue


It appears that it is Virginia’s urban districts that are more likely to remain closed while suburban and rural districts open. Ouch.

The critical theorists in VDOE and some of the ed schools can reasonably jump in on either side of the argument, though from their written “scholarship” the needs of students appear not to have crossed their minds in a generation.

Opponents of in-person instruction, however, will have to thread an eyeless needle to make the case that poor students are better off with the schools closed.

Even the Southern Poverty Law Center will oppose that premise. It promotes the teaching of antiracism and and social justice in the schools “through the four domains of identity, diversity, justice and action”.

Hard to do that when students are isolated at home and there is nobody to whom kindergarteners can confess their sins and those of their parents.

Joe Cunningham at Red State, Schools Definitely Need to Re-Open, So Let’s Figure Out the Right Way to Do It. My solution? Let all the 60 year old teachers retire early, and let the rest learn proper WuFlu hygiene. Certainly, they're all at least as smart as an average Walmart worker, right? 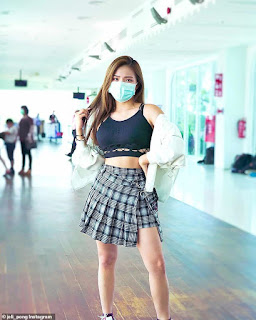 On the great mask debate, a blast from the past by CNBC, Doctors say Trump’s idea to ‘use a scarf’ to protect against coronavirus is unproven. Heh. Mission Local, To mask or not to mask: The evolving science and policy recommendations on masks.


“Never before in my 45-year career have I seen such a far-reaching public recommendation issued by any governmental agency without a single source of data or information to support it,” Osterholm said in response to the CDC’s lack of evidence on the effectiveness of cloth masks. “This is an extremely worrisome precedent of implementing policies not based on science-based data or why they were issued without such data.”

I think it's sensible to wear a mask if you must be around a lot of people at close distances, indoors. I do, if I go to the stores.Which I don't very much.  It's cheap; it might help. Can we shut up about this now?

On "the hydroxy", Stacy Lennox at PJ Media thinks the Media Should Do a Mea Culpa as French Analysis Offers a Stunning Observation About Hydroxychloroquine Use but AllahPundit digs up Two Randomized Trials that show No Benefit From Hydroxychloroquine In Treating COVID-19 Patients. Both seem to suffer a common fault, selecting patients with cases serious enough to hospitalized. Most benefits seem to accrue if used prophylactically or before serious symptoms occur.  I urge liberals to avoid it at all costs.

But the James Allen at WaPoo claims to have some good news about covid-19? Here are six reasons for optimism.
The occasionally sensible liberal, Megan McCardle at WaPoo says If we want any vaccine to actually work, we have to prepare for it now by giving all power to the Federal Government. It's funny how that is always the solution.


The logistics alone are daunting. We might not reach true normal until a sizable majority of the country is vaccinated, and our traditional method for fighting infectious disease — require vaccination to attend primary school — won’t achieve that. How do we purchase, store and distribute all those doses? How do we keep track of who has been vaccinated, particularly if vaccination requires multiple doses? All this needs to be resolved at the federal level, as much as possible, because in a country as open and mobile as the United States, we’re all only as well as our sickest fellow state.

While from Powerline, Herd Immunity already?  Science suggests initial models requiring 70-80% infections for herd immunity are wrong, and that transmission will likely falter at much lower levels. Evidence from Italy and UK support this. Maybe even NYC. But, having a dog might help: Does Exposure to Animals Provide Immunity to COVID-19?. Lots of random coronaviruses running around in animals, and it seems exposure to them might confer partial or total immunity to WuFlu.

Yahoo! reports that Scientists identify six different types of coronavirus with increasing severity levels. Unfortunately, the worst seems to be the most common.


The least severe categories of the virus were characterised by flu-like symptoms, either with or without fever.

Gastrointestinal problems, such as diarrhoea, dominate the third category, whereas fatigue, confusion and ultimately respiratory problems are associated with the increasingly severe fourth, fifth and sixth categories.

These figures were 8.6 per cent, 9.9 per cent and 19.8 per cent for clusters four, five and six respectively. Nearly half the patients in cluster six ended up in hospital, compared with just 16 per cent of those in cluster one.

I blame NYC for breeding the most severe form, and exporting it to the rest of the county. NRO editors, Andrew Cuomo Is Not a COVID Hero despite the media's insistence that his shit doesn't stink. Which, inevitably, brings us to the politics of the WuFlu. WaEx, Media are just plain lying about Kayleigh McEnany 'science' quote. They could have shortened that headline to five words. AllahPundit whines as Kellyanne Conway says I Want Trump To Start Doing Coronavirus Briefings Again. It's hard to trust your enemy's advice. Mark Meadows calls Fauci’s 1918 flu comparison ‘irresponsible’. You can always "compare" but that doesn't suggest similar outcomes.


“He suggested that this virus was worse than, or as bad as, the 1918 flu epidemic,” Mark Meadows said during a Fox News interview Thursday. “I can tell you that not only is that false, it’s irresponsible to suggest so.”

Fauci said Tuesday at an event sponsored by Georgetown University that the coronavirus is a “pandemic of historic proportions” and “when history looks back on it, will be comparable to what we saw in 1918,” when influenza killed tens of millions of people worldwide. COVID-19 has so far killed more than 588,000 people worldwide, and more than 138,000 in the U.S., according to statistics compiled by Bloomberg.

Matt Margolis at PJ Media, Now We Have Proof Dr. Fauci Is Full of Crap and Can't Be Trusted. Fauci says NY had exactly the right response to WuFlu, despite it's high infection and death rate. Apparently Dr. Fauci thinks you should put sick nursing care patients back in the nursing homes. Good to know. Stockman: The Clown Cars Are Fully Loaded And Dr. Fauci's Leading The Parade


By contrast, as we now surely understand, and you would think Fauci would, too, the Covid (light blue bars) is primarily a harvester of elderly persons already struggling with life-threatening respiratory, heart, vascular, renal and diabetic illnesses.

And surely you don’t shutdown the schools, gyms, bars, restaurants, movies, ball games, concerts, beaches, theme parks etc. because the vulnerable elderly don’t patronize these venues in appreciable numbers anyway, and could easily be warned to stay strictly away.

The key point, however, is that this whole unspeakable Lockdown Folly does not remotely stem from the “science”, as the MSM supporters of Fauci claim.

It’s just a hair-brained experiment in social control that happened because the Donald was too weak, ill-informed, distracted, and innumerate to send Fauci and his camarilla of doctors and vaccine-peddlers packing when the mid-March guidelines were first issued by the CDC.


Capt. Ed,  US, UK, Canada Accuse Russia Of Actively Hacking COVID-19 Research. But I thought they were too busy hacking the next election!

Big: US, UK and Canada jointly announce that cyber actors, most likely from Russia’s intelligence services are targeting orgs with “intention of stealing info …relating to the development and testing of COVID-19 vaccines.” pic.twitter.com/D7OAPpuIxP
— Hadas Gold (@Hadas_Gold) July 16, 2020


Details of the guidance are still being hammered out but it would be aimed partly at discouraging COVID-19 patients who have completed home quarantine from getting retested before returning to work or school, said Brett Giroir, assistant secretary for health at the U.S. Department of Health and Human Services.

Speaking on a call with reporters, he said such unnecessary tests were "clogging up the system."

"You do not need to be retested unless you are a critically ill person in the hospital or a very unusual case with immune suppression in which case you could shed virus for longer than seven or eight days," he said.

"Turnaround times continue to be an issue" for COVID-19 tests, he added, saying he would like to see the average get down to three days. Currently, only 26 states are taking three days or less to produce test results, with one state taking more than five days.

The new guidance on testing is "not a result of shortages," Girior added, but rather because such tests are not needed.

Twitchy,  HUUUUGE! –> Sources inside Trump admin confirm CDC misreporting COVID data to inflate the numbers, so the Trump admin took the counting function away from CDC and left it at HHS.

Under pressure, CDC started reporting that data with 3 week lag.

So HHS took over data reporting from CDC.

Spencer Landis at Da Caller, CDC Employees Made More Than 8,000 Federal Contributions To PACs And Politicians Since 2015. Only 5 Went To Republican Causes, FEC Records Show. So pretty much typical of Federal employees. But that would never affect how they do their work, right?

The Wombat has Rule 5 Sunday: Kate Upton To The Edge Of Madness up and running.
Posted by Fritz at 5:05 PM