Chicken Shit Solution in the Pipeline


The Dover-based Chesapeake Utilities Corp. announced earlier this month it would diversify its sources of natural gas with a plentiful and problematic Delmarva resource: chicken litter.

Via a partnership with CleanBay Renewables, an enviro-tech company focused on sustainably sourced natural gas, Chesapeake Utilities will deliver natural gas generated from chicken litter to customers on the Eastern Shore, according to a company announcement.

"As Chesapeake Utilities Corporation and its subsidiaries continue to move forward with regional expansion, the goal is to create a renewable natural gas ecosystem directly connected to Chesapeake Utilities' infrastructure," the announcement states.

Chicken litter is a combination of manure, bedding material, feathers and spilled feed.

The litter is a source of phosphorous and nitrogen (on average, a ton of dry litter contains 60 pounds of nitrogen and 40 pounds of phosphorus) which are nutrients that, while necessary for life, are overabundant in the Chesapeake Bay watershed and cause aquatic habitat destruction.

The Westover bio-refinery can repurpose more than 150,000 tons of chicken litter annually, which is equal to 765,000 million British thermal units of natural gas — enough energy to power about 10,000 homes, the announcement says.

I'm all for it, but the article doesn't deal with the other byproducts of biogas production from chicken shit, the nitrogen and phosphorus, which are the focus of the problems of applying chicken shit to farm fields in the Bay area. If I read this article on the production of biogas from manure, in addition to the biogas (mostly methane and CO2), the byproduct is a sludge, which presumably still contains the bulk of the N and P in the original shit. 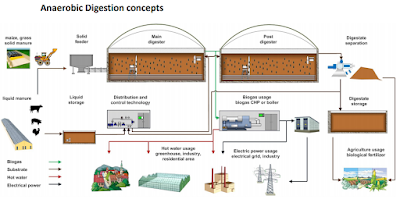 Now, one could imagine that the sludge is trucked out of the Bay region to be put on farm fields, but simple economics suggests it will be used fairly close to the point of origin. It's not going to magically disappear.
Posted by Fritz at 1:47 PM