The National Weather Service Mount Holly office says a rare meteotsunami happened in the Chesapeake Bay near Tolchester Beach. This is a tsunami wave that is brought on by air-pressure disturbances often associated with fast-moving weather events like severe thunderstorms, squalls, and other storm fronts– not by seismic activity.

The National Oceanic and Atmospheric Administration (NOAA) explains, “The storm generates a wave that moves towards the shore, and is amplified by a shallow continental shelf and inlet, bay, or other coastal feature.”

According to folks at Tolchester Marina, the storm was extremely intense. Cathy Bramble, marina president, tells Bay Bulletin the rain came down sideways and wind gusts were so strong that Tolchester’s 20-foot steel flagpole was bent. Bramble says the wind also blew a sign right into the marina’s palm tree, where it became lodged in the trunk.

Boaters at the marina saw hail and one sailboater’s wind instrument clocked a gust at just under 70 miles per hour.

NOAA Tsunami Warning Coordinator Dave Snider, who spoke to Bay Bulletin all the way from the National Tsunami Warning Center in Alaska, says it’s entirely possible a storm that strong could make the air pressure drop enough to create a meteotsunami.

Radar loops showed that the storm outflow–a line, or in this case a ring, of cool dry winds– move out of the thunderstorm cluster in a symmetric pattern. “This pattern would have produced gusty winds as it passed over the Cheapeake Bay and lowered the atmospheric pressure suddenly,” explains Snider.

NWS Mount Holly tweeted a chart showing the quick rise and subsequent fall along with several smaller “waves” following the initial disturbance in the Bay: 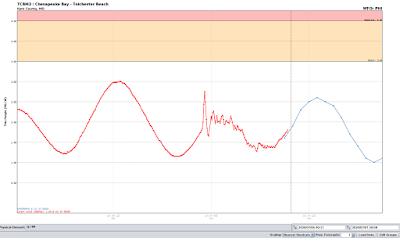 Cool! Almost a 1 foot surge in minutes! That does look like a classic "tsunami" signature in the tide chart, but given the width of Chesapeake Bay the wave don't have the power of an earthquake induced tsunami, that would have a wavelength tens to hundreds of miles.
Posted by Fritz at 3:14 PM