Wait, What About My Divisive Symbols! 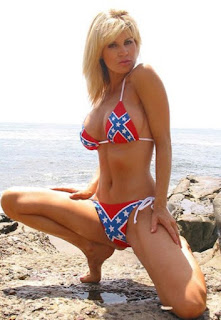 
Defense Secretary Mark T. Esper effectively banned displays of the Confederate battle flag on U.S. military installations, saying in a memo released Friday that the American flag is the “principal flag we are authorized and encouraged to display.”


The memo did not explicitly mention Confederate banners but stated that the “flags we fly must accord with the military imperatives of good order and discipline, treating all our people with dignity and respect, and rejecting divisive symbols.”

Esper chose not to specify which flags were prohibited to ensure that “the department-wide policy would be apolitical and withstand potential free speech political challenges” and that the services were “free to act on other flags,” a defense official said.

You'll never guess who objected, and you had to wait 10 more paragraphs to find out:


One organization championing LGBTQ rights, the Modern Military Association of America, sounded the alarm about the new policy.

“The Pentagon must immediately reconsider and take swift and appropriate action to ensure the Pride flag and LGBTQ Pride Month observances are not threatened,” Jennifer Dane, the group’s interim executive director, said in a statement. “If Secretary Esper refuses to reconsider, we will call on Members of Congress to take action.”

In other words, what about our rights to fly our divisive symbols! 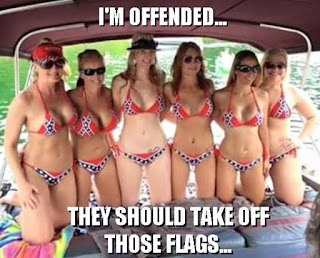 Now, I'm not that much of a flag guy. We don't commonly fly one at home. I love my country and all, but I don't feel I need to wear in on my sleeve (or my ass). But I respect everyone else's right to do so.

I grown and raised in California, where the Civil War barely touched (although gold from the gold fields helped finance the North), and the subject was not stressed in the schools. I'm not upset by people who use the Confederate Battle Flag to express their solidarity with the south; it's a harmless display of regional pride. It has not escaped my attention that the former rebel states of the south tend to be more overtly patriotic than the victorious states of the north, and per capita, provide more men for the US armed forces. 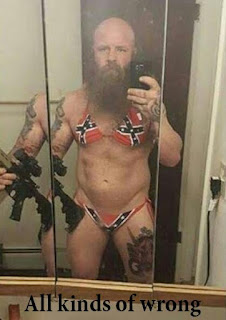 I don't agree with the new story that the confederates were "traitors" to the Union. Until the Civil War, the Unions was a union of sovereign states; without modern transportation, people had more loyalty to their states than to the Union as a whole. The Civil War settled that issue, at least until CHAZ

I find it far more obnoxious to wear Che Guevara on your shirt; the man was a monster almost equivalent to a Hitler shirt, but with a smaller death count, but for the most part the people who do that are engaging in a juvenile act of rebellion.

Linked at Pirate's Cove in the weekly Sorta Blogless Sunday Pinup and linkfest. The Wombat has Rule 5 Sunday: Kate Upton To The Edge Of Madness up and running.