The Virginia General Assembly shifted fisheries management of menhaden from the politicians to the Virginia Marine Resources Commission earlier this year.

The move remedies years of dissatisfaction among many in the sportfishing industry who were concerned about overfishing and potential impacts to species such as striped bass.

Menhaden are often called the most important fish in the ocean, especially the coastal ocean. To use a biologist’s term, menhaden “transfer energy upward.” They are filter feeders that help clean the water by consuming phytoplankton (including algae) and zooplankton. They are also an important forage species for larger fish.

The overfishing prompted Commerce Secretary Wilbur Ross to concur with an ASMFC finding that Virginia was noncompliant with Amendment 3 to the Interstate Fishery Management Plan for Atlantic Menhaden. Ross declared a menhaden moratorium in Virginia waters, effective June 17, 2020. To escape the moratorium, Virginia had to implement and enforce the 51-ton cap before June 17. 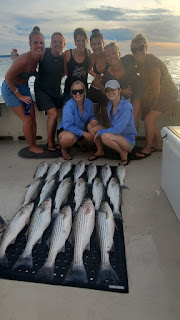 Virginia, under new menhaden management, complied and enacted new regulations for the 2020 fishing season, setting the cap at nearly 36,000 metric tons. The 15,000-ton reduction was designed to reflect the fishing overages in 2019.

The VMRC indicated the 2021 cap will return to 51,000 metric tons, if catch limits this year are honored.
. . .
Why should recreational anglers care?

Macaluso referenced studies that show industrial netting of menhaden could be responsible for 30 percent fewer striped bass, which he called the “most important recreational fish in the United States.” Macaluso lives in Louisiana, another area where Omega operates a vibrant reduction fishery. He said 1.5 billion pounds of menhaden are taken off Louisiana and Mississippi every year.

Billion with b? That's a lot of fish.

Bycatch, the issue when non-target species are scooped up in nets and killed or “released” nearly dead, is a major concern. Macaluso said some reports show between 50,000 and 70,000 spawning-sized redfish killed annually as bycatch in the Gulf of Mexico. “It’s a staggering number,” he said, adding some estimates show menhaden fishing in the gulf may be reducing redfish and speckled trout populations by as much as 50 percent.

Leonard said he knows many recreational anglers simply want the reduction fishery to go away. “I don’t think that will be a recommendation,” he said.

I doubt it too, but some sanity is needed.

The Wombat has Rule 5 Sunday: Kate Upton To The Edge Of Madness up and running.
Posted by Fritz at 5:33 PM