People are still chewing on the FBI documents released by Lindsey Graham and the Senate last week. At Power Line Scott Johnson presents Extracts from a Subsource, Cont'd

One might, by now, harbor some skepticism about the dossier. One might even be inclined to doubt the story that Trump was “into water sports” as the Primary Subsource so delicately described the tale of Trump and Moscow prostitutes. But, in this account, there was an effort, however feeble, to nail down the “rumor and speculation” that Trump engaged in “unorthodox sexual activity at the Ritz.”

While the Primary Subsource admitted to the FBI “he had not been able to confirm the story,” Source 2 (who will be remembered as the hustler always looking for a lucrative score) supposedly asked a hotel manager about Trump and the manager said that with celebrities, “one never knows what they’re doing.” One never knows – not exactly a robust proof of something that smacks of urban myth. But the Primary Subsource makes the best of it, declaring that at least “it wasn’t a denial.”

If there was any denial going on it was the FBI’s, an agency in denial that their extraordinary investigation was crumbling about them.


An FBI memo declassified last week shows that the Steele dossier’s allegations about former Trump campaign aide Carter Page came from two sources, one of whom was described as having a Russian spy handler, while the other was the source of an allegation in the dossier that the FBI flagged as possible Russian disinformation.

The FBI document shows that a contractor for Christopher Steele told investigators in January 2017 that two women — identified as Source 3 and Source 5 — provided the information about Page that ended up in the dossier.

According to the 57-page FBI memo, the Steele contractor described Source 3 as “a close personal friend” who had provided information for him in the past about Russian companies and state entities. Steele’s source said that Source 5 had a “kurator” — or a handler — in Russian intelligence.

Yep, the FBI, the DNC and the Hillary campaign knowingly bought Russian disinformation against Trump. Unmistakable truth claims  Finally I found the proof.  The full resume that shows this person is almost without a doubt the primary sub source for the Steele dossier.  Bonus:  He worked with Fiona Hill! Igor Danchenko, whoever that is, but he doesn't live in Russia. 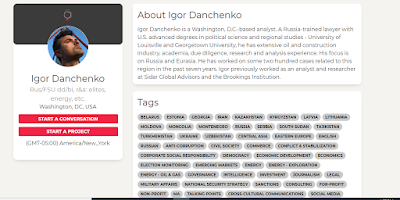 THREAD 2 on Igor Danchenko=PSS. Continues https://t.co/JxI9kctTCb. This thread will go through the FBI questions on Steele memo 2016/95, which, with 2016/80, is by far the most important memo, as it makes lurid collusion allegations.
— Stephen McIntyre (@ClimateAudit) July 20, 2020

Judge Boasberg, if you're listening, the FBI swore an affidavit that the PSS was "Russian-based". In fact, we now know that the PSS lived a few miles down the road from your courthouse, literally.
— Hans Mahncke (@HansMahncke) July 20, 2020


It is a shocking black eye for American law enforcement and intelligence agencies. The Justice Department’s criminal investigation is said to be reaching its conclusion. Americans need answers.


You can read the email here: File JW-v-DOJ-Strzok-Page-Prod-23-00154-pg-69.pdf
A day before Trump took office, Strzok, Priestap and other senior FBI managers were scrambling to figure out their strategy as Trump assumed the presidency and the bureau continued to pursue its deeply flawed Russia collusion probe, according to emails turned over under the Freedom of Information Act to the conservative watchdog Judicial Watch and made public Friday.

By that time, the bureau knew that the Christopher Steele dossier — the crucial evidence used to support a FISA warrant against Trump associates — had been partly debunked by one of the former MI-6 agent's intelligence sources, who denied information attributed to him in the dossier.

The FBI also knew from an agent who had investigated Trump national security adviser Micheal Flynn that there was no "derogatory information" against the retired general after a 5-month investigation and the agent wanted to shut down the probe.

But FBI leadership had a different plan, to keep the investigation codenamed Crossfire Hurricane open in the absence of any credible evidence and try to trip up Flynn in an interview during the chaotic first days of a new presidency.

"Please relay above to WFO [Washington Field Office] and [redacted] tonight, and keep me updated with plan for meet and results of same," Strzok wrote in an email chain late on the night of Jan. 19, 2017, hours before Trump's inauguration. File JW-v-DOJ-Strzok-Page-Prod-23-00154-pgs-61-64.pdf

The email exchanges — and others like it made public on Friday — have shocked veteran intelligence experts, who told Just the News that any effort to use official briefings of the president and his White House to spy, investigate or gather information violated the necessary trust for keeping a president apprised of intelligence in a dangerous world.

"It's unbelievable this kind of stuff was going on," said Fred Fleitz, a longtime intelligence analyst who served as chief of staff to Trump’s third national security adviser John Bolton. "How is the president to do his job with this going on?

Tim Hains at RCP, Trump: Obama And Biden Spied On My Campaign, Should Be In Jail.. He's not wrong, but a few FBI and DOJ officials involved would be a good start. Greg Re at Fox, Meadows signals imminent indictments in Durham probe: 'It's time for people to go to jail'. Sundance, Representative Doug Collins: “I Believe”…. Durham's going to bring indictments.


Chuck Ross at Da Caller, Democrats Who Pushed Kremlin-Influenced Dossier Want FBI Briefing On 2020 Foreign Disinformation Efforts. They need to spy on themselves?


The newly released records include a January 11, 2017, email from Strzok to Lisa Page, Priestap, and Deputy Assistant Director of Counterintelligence Jon Moffa, a New York Times report which refers to the dossier as containing “unsubstantiated accounts” and “unproven claims.” In the email, Strzok comments on the article, calling it “Pretty good reporting.”

The article, citing security sources, notes that “Steele became increasingly frustrated that the FBI was failing to take action on the intelligence from others as well as him. He came to believe there was a cover-up: that a cabal within the Bureau blocked a thorough inquiry into Mr Trump, focusing instead on the investigation into Clinton’s emails.”

Strzok responds: “Thanks Mike. Of course not accurate [the cover-up/cabal nonsense]. Is that question gaining traction anywhere else?”

The records also include a February 10, 2017, email from Strzok to Page mentioning then-national security adviser Michael Flynn (five days before Flynn resigned) and includes a photo of Flynn and Russian Ambassador Sergey Kislyak. Strzok also makes a joke about how McCabe had fat shamed Kislyak.


In Monday’s filing, Flynn repeated claims that he is actually innocent despite his sworn admissions, that a guilty plea is not a conviction and that actions by two federal judges voided his pleas.

As a judge, Sullivan has no standing to seek an en banc hearing, they argued.

“In lay terms, umpires don’t get to swing bats or run bases; they suffer no harm when one team wins and the other loses,” Flynn’s attorneys argued.

The government echoed Flynn’s arguments in a separate filing Monday, saying Sullivan is not entitled to second-guess the executive branch’s constitutional authority to decide when to continue a prosecution. Sullivan’s inquiry into whether dismissing the case is legitimate and in the public interest is an impermissibly “intrusive” action by the judiciary and “would usurp [that] core executive power,” the government said.

As the City Journal notes, The Prosecution Never Rests - It’s a hard path to ending the politicization of indictments, investigations, and other legal tools.


As Eli Lake detailed in a thorough article for Commentary, the now-public record does raise significant questions about whether the investigators who questioned him during the January 2017 interview at which Flynn allegedly lied, and the broader FBI investigation itself, had mistreated Flynn. Flynn’s critics replied, in turn, that the investigation was warranted from the start; that his statement to investigators that he had not discussed sanctions on the phone with Kislyak was not merely mistaken but an intentional lie; and that the department could not plausibly disclaim an ability to prove Flynn’s guilt beyond a reasonable doubt when Flynn himself had already admitted guilt in his plea bargain. (Whatever one thinks of the first two of those points, critics making the third point ought to read Rakoff’s essay.)

Upon receipt of the Justice Department’s motion to dismiss the case, Judge Emmet Sullivan undertook an astonishing assertion of control over the DOJ’s prosecution, inviting a retired federal judge and the public at large to make arguments in favor of completing the prosecution that the prosecutor itself no longer stood behind. The U.S. Court of Appeals for the D.C. Circuit promptly heard arguments on Flynn’s petition to block Sullivan’s proceedings; in June, it issued a decision preventing Sullivan’s radical intervention.

As the D.C. Circuit explained, Judge Sullivan had confused his own narrow authority for the Justice Department’s very different responsibility. While a judge hearing such a motion to dismiss the case after a guilty plea should be on the watch for “extraordinary” cases of “harassment of the defendant or malfeasance such as bribery,” in the absence of such evidence the decision to drop a prosecution rests solely in the hands of the prosecutors—and for good reason. The Justice Department, exercising a part of the Constitution’s executive power on behalf of the elected president, must have total discretion to end a prosecution “in the interest of justice” when “evidence comes to light calling into question the integrity or purpose of an underlying criminal investigation.” Judge Sullivan’s proceedings were geared toward scrutinizing and second-guessing prudential and legal judgments committed to the prosecutor’s broad discretion. For that reason, the D.C. Circuit stopped the process before it could go any farther. Sullivan has appealed to the Supreme Court to vacate the D.C. Circuit’s decision, but barring further developments, the Flynn case is over.

Supporters of Flynn—and President Trump—celebrated the D.C. Circuit’s ruling. And it no doubt gave them a great victory. But it also vindicated one of the core arguments that President Trump’s critics have made from 2015 onward: namely, that it is impossible in presidential politics to separate character from policy. The Flynn case—from its origins in the Obama administration to its evident conclusion in the Trump administration—reminds us that immensely consequential matters are committed to the nonpublic discretion of Justice Department officials who answer to the president and his political appointees.

This means the House committees will have a harder time proceeding with their quest to access Trump’s financial records before this Congress ends on January 3—time is of the essence, and even a delay of two more weeks will make the litigation hard to pursue.

If the tax records will help the Democrats, they will leak from the IRS before the election. If they do not we can presume they prefer the issue to the answers.
Posted by Fritz at 10:48 AM