Should Women Be Required to Register for the Draft? 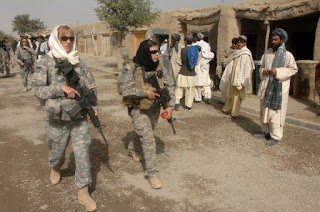 When equality comes at a cost. You know, if you're qualified to be infantry fodder. . .
Army Sec: American Women Could Be Required to Register for Draft if Combat Jobs Integrated


Army Secretary John McHugh said Monday that opening up all combat roles to women would push lawmakers to engage in an “emotional discussion and debate” about whether or not women should also be required to enter the draft.

“If your objective is true and pure equality, then you have to look at all aspects and at some point Selective Service will have to be one of those things considered very carefully,” McHugh said at the U.S. Army’s annual meeting in Washington, D.C., according to the Washington Examiner.

It would be an interesting test of feminism's real commitment to pure equality.


McHugh said that Congress would have to decide to require women to sign up for the draft.

His remarks come just weeks after the service secretaries were required to submit recommendations to Defense Secretary Ash Carter as to whether certain combat positions should remain shuttered to women. It is widely believed that the Marine Corps requested an exception for some infantry and reconnaissance units, while the other services requested no exceptions.

Carter is due to make a decision on women in combat roles by January 1 after hearing arguments from service leaders.

Having your 18 year old daughter have to sign up for the draft certainly sounds like an advance in feminism to me.

The drive for women in combat from women in the military is real, and it is driven in part by the fact that combat service is an important factor in promotions. If women can't get into combat positions, they are less likely to be promoted. I suspect this is more a concern of women in the officers corps' and not enlisted women, who would probably prefer a safe stateside logistical billet than toting rifles and heavy packs around dusty deserts on the far side of the world. For that matter, so would most men. So maybe some provision needs to be made for female officers to get into combat units. If they get fail or killed at a higher rate than their male counterparts, well, that's just what they asked for. 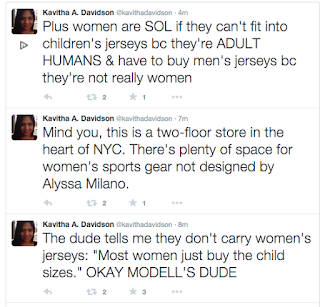 Meanwhile, the "true" feminists have identified a new issue of concern. Via Ace: Newest Feminist Crisis: Sports Jerseys Are Not Made in Women's Sizes


This feminist wanted to buy an Eli Manning sports jersey -- and was aghast to find there were no women's sizes. Women usually bought children's sizes, she was told.

But it gets worse -- because Women of Size (WoS), that is, XL women, cannot fit into child's sizes. So they have to buy men's jerseys, which actually fit them fine. But they're marked as "Men's sizes" which therefore denies the female gender exists entirely. Or something.

I hope you'll all join me in staging a candlelight vigil tonight. 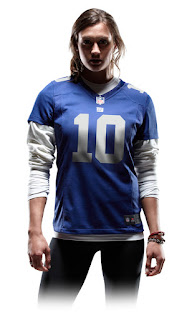 I can't tell you how much that tuts mir leid.

Of course, it turns out not to be true; women's jersey sizes are made, and the fact that Modells in New York fails to carry them reflects the fact that jerseys aren't considered high fashion in the Big Apple.

Damn that free market, anyway. Of course, if Bernie Sanders is made President, we'll only have one color and size of jersey. Gotta save the economy from too many choices, ya know.
Posted by Fritz at 6:00 AM