I'm Back Yet Again 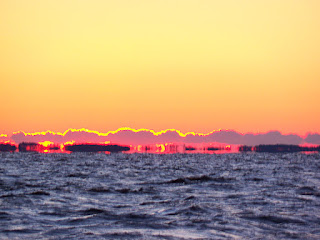 Trevor, Tom, myself and a friend of Trevor named Gary did a charter trip with Pete today. Except for keeping fish, and the recreational limit (20 inches for  instead of 18 for rockfish) it was much the same as a commercial trip, with less pressure to catch fish. We started at Cedar Point, but left quickly as water was rough there and the fish not biting. The wind died all day long.

These clouds over the Eastern Shore had a golden lining. . . 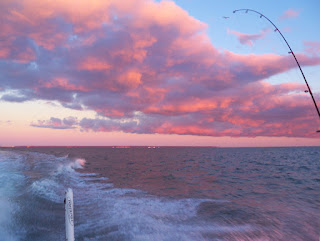 While the clouds over the west side were tinged in pink. 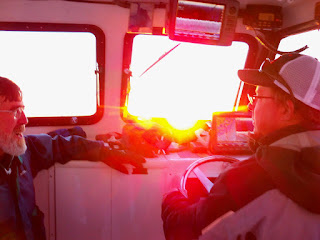 Pete and Tom discuss fishing, I think, as we approach the Honga River Bridge. 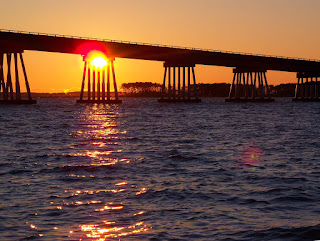 Sunrise at the Honga River Bridge, the original bridge to nowhere, if Hoopersville is nowhere.

After a couple of very cold, windy days, the water temperature had dropped almost 10 F, from 65 to 55 F, changing the way the fish behaved, and where they schooled up. Nevertheless we caught fish at most places we stopped. 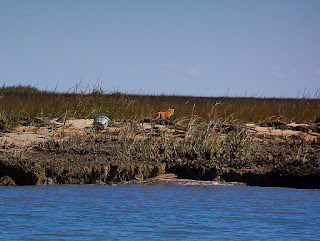 A Red Fox on South Marsh Island (I think). How the heck does a fox get out on an island at least 2 miles from the mainland?  Did it swim, or did it walk out this winter when the ice was thick in Tangier Sound?  We didn't notice many birds on the island. 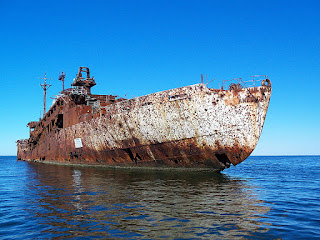 A stop at the American Mariner, also known as the Target Ship, which is looking worse than ever, but is decked out with two fresh signs to warn boaters: 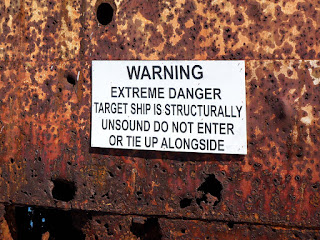 In October 1966, she was scuttled in shallow water with demolition charges by Navy Underwater Demolition Team #22. Settling upright in 20 feet of water, she appears to be merely anchored there. The hulk was used for target practice by naval aviators flying out of NAS Patuxent River until at least 1971.[1] Her hulk is still visible in the Chesapeake Bay, at 38°02′25″N 76°09′17″WCoordinates: 38°02′25″N 76°09′17″W, roughly midway between Point Lookout and Smith Island. 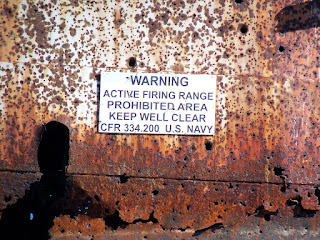 We were also overflown by jets from Patuxent River Naval Air Station, both F18s and a JSF (according to Tom). He calls the JSF the "just science fiction." Loud suckers. 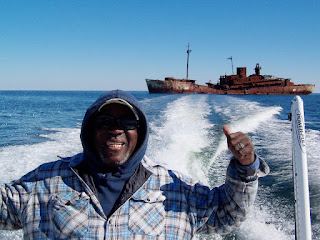 Trevor says "hey" as we leave the Target ship. At this point we were one fish short of a recreational limit 9 fish (2 fish per angler over 20 inches plus one for the boat), which Trevor filled at another stop on the way north. 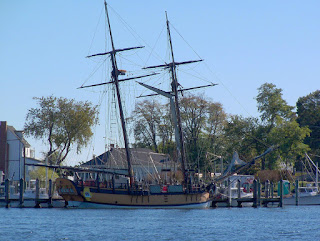 Back at Solomon's Island by 3 PM and home by 4. 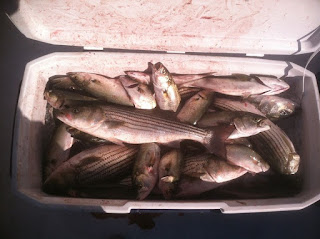 UPDATE: Thanks to Tom, a picture of the fish cooler at the dock.
Posted by Fritz at 6:42 PM