From the USGS: Invasive Northern Snakehead Carries Bacteria as Bad as its Bite

The invasive northern snakehead fish found in the mid-Atlantic area is now cause for more concern, potentially bringing diseases into the region that may spread to native fish and wildlife, according to a team of U.S. Geological Survey scientists.

The team found that a group of adult northern snakehead collected from Virginia waters of the Potomac River south of Washington D.C. were infected with a species of Mycobacterium, a type of bacteria known to cause chronic disease among a wide range of animals.

"Mycobacterial infections are not unusual among fish, but they are nonetheless noteworthy because they can have an impact at the population level and potentially even affect other fish and wildlife," said lead author Christine Densmore, a veterinarian with the USGS. 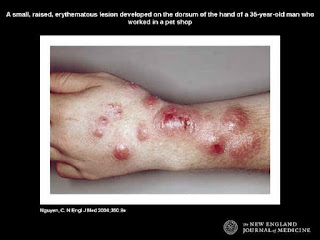 It's also notable because mycobacteria in fish can cause human disease, notably "Fish Handlers disease"

Not to mention leprosy (Mycobacterium leprae).


The effect of this particular species of Mycobacterium on humans is not known.

Mycobacterial disease in fish is often called piscine mycobacteriosis, and it is associated with many different species of mycobacteria. In this instance, no external signs of disease were noted on the infected snakehead fish, and the disease was discovered microscopically as lesions associated with the bacteria that were visible within internal organs.

A few years ago it was reported that 60% of Stripped Bass in Chesapeake Bay were infected with Mycobacteria. Only a fraction of them show symptoms, which can range from liver nodules to massive skin lesion and emaciation.

"Another interesting feature of this particular mycobacterial organism is that we have not been able to identify it in the available gene sequence data base, so this may be a unique, undescribed species of Mycobacterium. However, more research is needed to further characterize the bacteria and its potential effects on the northern snakehead population and other native species," said Densmore.

So, in short, we have a new species of Mycobacterium infecting a new species of fish, one the authorities (if not sport anglers) would like to do away with. We don't know if the bacteria substantially affect the fish, and we don't know if it it communicable to other fishes or humans, although precedent suggest it may well be.
Posted by Fritz at 3:41 PM