Martin O’Malley, who is hoping to jumpstart his presidential campaign with a strong debate performance here Tuesday, continues to get little love from his home state of Maryland.

The former governor is backed by just 4 percent of voters who are Democrats or Democratic-leaning independents in a potential presidential primary matchup in the state, a new Washington Post-University of Maryland poll finds. 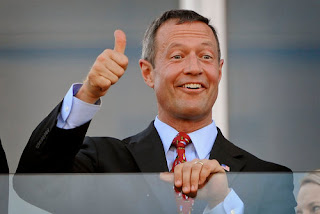 O’Malley lags far behind former secretary of state Hillary Rodham Clinton, who gets the support of 43 percent, followed by Vice President Biden -- who is mulling a run -- with 26 percent and Sen. Bernie Sanders (I-Vt.) with 20 percent.

I'm a little surprised he isn't more popular in Maryland; the state is generally further left than Cuba. I can see how lack of name recognition in other states could be an initial hindrance for him. But in Maryland, he's well known as an aggressive tax and spend democrat; he even contrived to tax the rain (since repealed, in part). Maybe the appetite for new taxes among democrats knows some bounds after all.