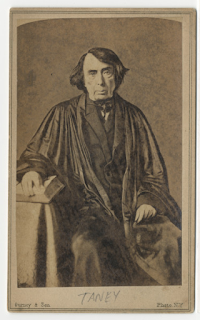 
The Frederick Police Department is investigating a statue in front of City Hall after officials got a call on Sunday around 8:18 a.m. that it had been defaced, according to a press release.

The bust of Roger B. Taney had red paint dumped on it, police say.

Police say the paint was still wet to the touch and they are unsure when exactly the vandalism occurred.

The Frederick Police Department's Criminal Investigation Division will be assuming the case and conducting a follow-up investigation.

Taney, a Supreme Court Chief Justice, ruled in 1857 that a Missouri slave was constrained to the boundaries of slavery, despite traveling into free territory with his master.

The Fourteenth Amendment overturned the Dred Scott decision in 1868, granting all people born in the U.S. citizenship regardless of color.

Roger B. Taney may have practiced law in Frederick, but he was a Calvert County boy, having been born and raised on a farm out in Adelina, just outside of Prince Frederick.

Until recently, tobacco farming was a big business in Calvert County, and slavery was a big part of that. All the old mansions around here have slaves quarters, and old time families, black and white, share the same surnames.

Aside from the Dred Scott decision, which arguably led the United States into it's ugliest war, later justices have been rather kind to Roger:


Justice Benjamin Robbins Curtis, author of one of the dissents on Dred Scott, held his former colleague in high esteem despite their differences in that case. Writing in his own memoirs in 1872, Curtis described Taney:


He was indeed a great magistrate, and a man of singular purity of life and character. That there should have been one mistake in a judicial career so long, so exalted, and so useful is only proof of the imperfection of our nature. The reputation of Chief Justice Taney can afford to have anything known that he ever did and still leave a great fund of honor and praise to illustrate his name. If he had never done anything else that was high, heroic, and important, his noble vindication of the writ of habeas corpus, and of the dignity and authority of his office, against a rash minister of state, who, in the pride of a fancied executive power, came near to the commission of a great crime, will command the admiration and gratitude of every lover of constitutional liberty, so long as our institutions shall endure.

Modern legal scholars have tended to concur with Justice Curtis: that despite the Dred Scott decision, Taney was both an outstanding jurist and a competent judicial administrator. His mixed legacy was noted by Justice Antonin Scalia in his dissenting opinion in Planned Parenthood v. Casey: