Several weeks ago, a federal court issued an injunction against EPA enforcement of a new rule based on the Clean Water Act, arguing that the Obama administration had exceeded its Congressional authority. The ruling only applied in the thirteen states party to the lawsuit, however, but the administration still argued that the North Dakota court did not have the jurisdiction to rule on the issue, and that only an appellate court could hear the case. Regardless, the EPA announced shortly afterward that it would continue to enforce the new rule in all other states.

Be careful what you wish for. The Sixth Circuit handed down its own injunction against the rule today, and broadened its effect to all 50 states:


A federal court ruled Friday that President Obama’s regulation to protect small waterways from pollution cannot be enforced nationwide.
In a 2-1 ruling, the Cincinnati-based Court of Appeals for the Sixth Circuit delivered a stinging defeat to Obama’s most ambitious effort to keep streams and wetlands clean, saying it looks likely that the rule, dubbed “waters of the United States,” is illegal.
“We conclude that petitioners have demonstrated a substantial possibility of success on the merits of their claims,” the judges wrote in their decision, explaining that the Environmental Protection Agency’s new guidelines for determining whether water is subject to federal control — based mostly on the water’s distance and connection to larger water bodies — is “at odds” with a key Supreme Court ruling.

The court called into question both the rule itself and the process by which the EPA promulgated it. The opinion notes that the EPA apparently ignored Rapanos in its zeal to seize more federal authority:


Petitioners first claim that the Rule’s treatment of tributaries, “adjacent waters,” and waters having a “significant nexus” to navigable waters is at odds with the Supreme Court’s ruling in Rapanos, where the Court vacated the Sixth Circuit’s upholding of wetlands regulation by the Army Corps of Engineers. Even assuming, for present purposes, as the parties do, that Justice Kennedy’s opinion in Rapanos represents the best instruction on the permissible parameters of “waters of the United States” as used in the Clean Water Act, it is far from clear that the new Rule’s distance limitations are harmonious with the instruction.

Furthermore, the court expresses concern over what appeared to be a bait-and-switch in the comments process, and that the EPA simply cannot substantiate the rule with any solid science — a point made by the North Dakota court in August, too:


Moreover, the rulemaking process by which the distance limitations were adopted is facially suspect. Petitioners contend the proposed rule that was published, on which interested persons were invited to comment, did not include any proposed distance limitations in its use of terms like “adjacent waters” and significant nexus.” Consequently, petitioners contend, the Final Rule cannot be considered a “logical outgrowth” of the rule proposed, as required to satisfy the notice-and-comment requirements of the APA, 5 U.S.C. § 553. See Long Island Care at Home, Ltd. v. Coke, 551 U.S. 158, 174 (2007). As a further consequence of this defect, petitioners contend, the record compiled by respondents is devoid of specific scientific support for the distance limitations that were included in the Final Rule. They contend the Rule is therefore not the product of reasoned decision-making and is vulnerable to attack as impermissibly “arbitrary or capricious” under the APA, 5 U.S.C. § 706(2).

Remember, though, that this is a temporary injunction. The issues raised by the judges in this 2-1 decision are not fully established in an evidentiary process. Even the initial ruling in August was a pretrial injunction, not a final decision on the merits. However, in both cases the courts decided that the states have a substantial likelihood of establishing these facts in the eventual trial, and that the enforcement of the rule would create at least some unnecessary harm.

Note that the "new rule" is based on the  Clean Water Act, but I called it a land grab. What the "new rule" entails is that EPA claims the right to regulate the land use of any land where rain falls and washes into a stream, however small and temporary or the ocean. That, very simply, is all land in the United States. They might not frame it that way (EPA certainly wouldn't) but that's the ultimate goal. While they may not start by regulating everything (even the EPA has finite resources), they would be able to pick and choose where to enforce it, allowing for intimidation of groups larger than those specifically targeted. That discretion would also be an excuse to ask for more resources to widen the enforcement: 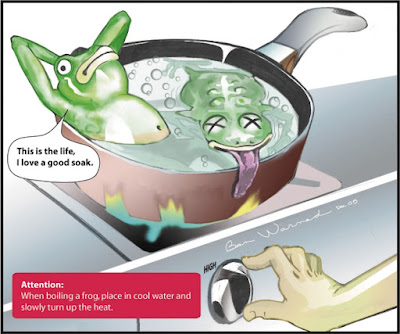 The EPA may or may not appeal, depending on whether they think they can succeed. If I were them, I would pass on the current Supreme Court and hope for a more reliable 5th vote later.
Posted by Fritz at 10:34 AM