As I suggested earlier, Roseburg, Oregon isn't going along with President Obama's plan to use their city in his anti-gun morality play: 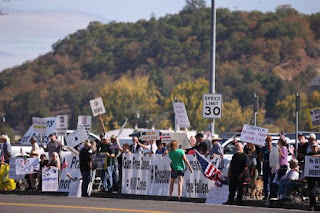 Conservative leaders in Douglas County say they expect at least 2,400 to show up among three different protest sites. 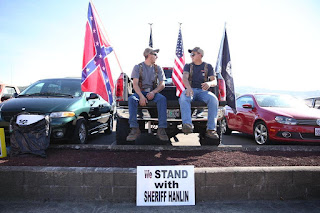 Lori and Dan Altman, both 60, don't think the president should be in town.

"People are ready for the healing process here, and he's just dragging it out, salting the wounds. He shouldn't be here," said Lori Altman.

Dan Altman said he took an oath to uphold the constitution when he joined the Navy. "So, I plan to uphold it my entire life." 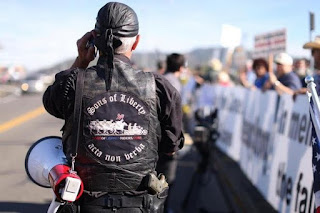 Photographer Beth Nakamura is talking to some protestors. Rick Halle, who is with about 10 other people, said he wants to have a peaceful protest that gets across the message that they don't want Obama "pushing political agendas on us."

"We're upset that literally within moments of this tragedy Obama was using it to force a political agenda," Halle said.

Of course, there were outside agitators plugging gun control:


Today @POTUS will be in #Oregon. I wish he was coming to celebrate a happy occasion. Instead Pres. Obama will be here to share our sorrow.
1:52 PM - 9 Oct 2015 · Portland, OR, United States

Steve Mims, the Ducks football writer for the Eugene Register-Guard tweeted: "Politics aside, just can't believe there are people who don't welcome a president to console those who lost so much."

Portland and Eugene. It figures . . .

To the New York Time's amazement: Common Response After Killings in Oregon: ‘I Want to Have a Gun’


“It’s opened my eyes,” said Mr. Vicari, 19. “I want to have a gun in the house to protect myself, to protect the people I’m with. I’m sure I’ll have a normal life and never have to go through anything like this, but I want to be sure.”


Some families touched by the violence and students who fled gunfire said they now feared that the kind of bloodshed seen inside Classroom 15 of Snyder Hall at Umpqua Community College could happen anywhere. Some said they were planning to buy guns. Others said they would seek concealed-weapons permits. Others, echoing gun advocates’ calls for more weapons on campus, said the college should allow its security guards to carry guns. A few said they thought that stricter gun control laws could have averted the massacre.

I wonder how many people they had to ask before they got the answer they wanted?


“This just shows you, you have to have a way to protect yourself,” said Makayla Thomas, 19, who raced into a student center when the attack started and huddled there until the police arrived. “It’s happened once. Who knows what can happen?”

Jamie Skinner, 34, a former girlfriend of Chris Mintz, the Army veteran who blocked the door to a classroom at Umpqua Community College and was shot by Mr. Harper-Mercer, said in an interview last week that the massacre in Roseburg would not change her opinion that owning guns was important. Ms. Skinner has worked as an armed security guard, and said she and Mr. Mintz went to shooting ranges for recreation.


In a Monday night interview with Fox News host Bill O’Reilly, David Jaques, publisher of local paper the Roseburg Beacon, said Obama wasn’t welcome in the town if he was going to use the visit to push his anti-gun agenda.

Jaques said Obama wanted to “stand on the corpses of our loved ones” just to “make some kind of political point” by traveling to the town.


This wasn’t Jaques’ first stand against the president. In an interview with Breitbart, Jaques said of the president’s visit, “I think that’s very inappropriate. I think it’s very disrespectful to the families.”

“The fact is that the president has no connection with this community. He has no connection with any of the families, and he made it abundantly clear in his opening press statement … he’s holding a press conference 3,000 miles from here, telling us, almost implying that he could have single-handedly prevented this if the Congress would have listened to him.”


“That’s why we have guns: We don’t have the government dictating when to get on our knees,” said Kellim, who is 86.

A community college student has started a petition to allow concealed weapons on all campuses, echoing hotly disputed arguments from national gun groups that mass shootings could be stopped by more “good guys with guns.” In 2011, an Oregon court said public colleges could not ban guns from campus.

“This just shows you, you have to have a way to protect yourself,” said Makayla Thomas, 19, who raced into a student center when the attack started and huddled there until the police arrived. “It’s happened once. Who knows what can happen?”

As U.S. citizens, who elected Obama to his office, we owe him safety and a respectful hearing. We do not owe him acquiescence.
Posted by Fritz at 4:40 PM