Is 55 the Perfect Temperature?

In a sweeping new study published Wednesday in Nature, a team of researchers say there is a strong relationship between a region’s average temperature and its economic productivity — adding another potential cost to a warming climate.

I suppose sweeping in this case means we are supposed to take a little data and make massive, unwarranted conclusions.


Culling together economic and temperature data for over 100 wealthy and poorer countries alike over 50 years, the researchers assert that the optimum temperature for human productivity is seems to be around 13 degrees Celsius or roughly 55 degrees Fahrenheit, as an annual average for a particular place. Once things get a lot hotter than that, the researchers add, economic productivity declines “strongly.”

“The relationship is globally generalizable, unchanged since 1960, and apparent for agricultural and non-agricultural activity in both rich and poor countries,” write the authors, led by Marshall Burke of Stanford’s Department of Earth System Science, who call their study “the first evidence that economic activity in all regions is coupled to the global climate.” Burke published the study with Solomon Hsiang and Edward Miguel, economists at the University of California, Berkeley.

So, this data only applies over the last 50 years. I was wondering how they were going to rationalize how most of the world's great civilizations, Egypt, Rome, Greece, China, and Mesoamerica all started in relatively warm climates. They got around it by ignoring it.


If the findings are correct, they add, that means that unmitigated global warming could lead to a more than 20 percent decline in incomes around the world, compared with a world that does not feature climate change. And this would also mean growing global inequality, since poorer countries will be hit by worse temperature increases — simply because “hot, poor countries will probably suffer the largest reduction in growth.” Indeed, some already wealthier countries with cold weather, like Canada or Sweden, will benefit greatly based on the study, moving closer to the climatic optimum.

There is also recent research suggesting global warming will reduce wheat yields, one of many major projected effects on agriculture. In other words, there is a body of existing research that’s consistent with the new, more sweeping conclusion of the Nature paper.

Of course, there's no evidence that wheat yields are actually declining, so this is merely a case of models supporting models and not actually following the data. 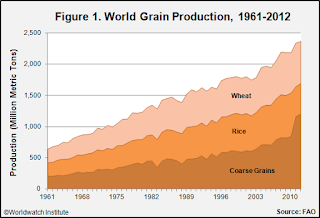 However, the new work has already drawn criticism — University of Sussex economist Richard Tol called it “hugely problematic” in an email to the Post — so it remains to be seen what other researchers make of the work.

At the center of the new paper is a historical, economic analysis that culls data from 166 countries over half a century, analyzing GDP per capita against temperature fluctuations that the countries experienced.

Importantly, the researchers did not compare countries with one another — an approach that would have been beset with many confounding factors. Rather, they compared each country “to itself in years when it is exposed to warmer- versus cooler-than-average temperatures due to naturally occurring stochastic atmospheric changes.”

The second half of the study then projected the toll of a steadily warming trend, based on these relationships. “In 2100, we estimate that unmitigated climate change will make 77% of countries poorer in per capita terms than they would be without climate change,” the paper says. 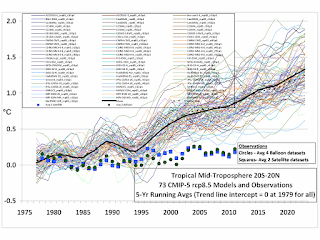 I'm sure they were taking at least the mean if not the maximum warming predicted by the IPCC as their prediction for 2100. The IPCC has been over-predicting temperature increases world wide for years now, in it's quest to gain control over the world. In reality, temperatures haven't increased significantly in about 20 years according to the satellite data:


However, it is important to note that this is based on a scenario in which the world does nothing to curtail global warming — a scenario that is becoming increasingly difficult to believe. This was one of Tol’s criticisms — “they extrapolate from modest warming between 1960 and 2015 to massive warming between 2015 and 2100,” he objected, among a number of other technical criticisms.

So how does your state stack up on their scale: Average Annual Temperature for Each US State 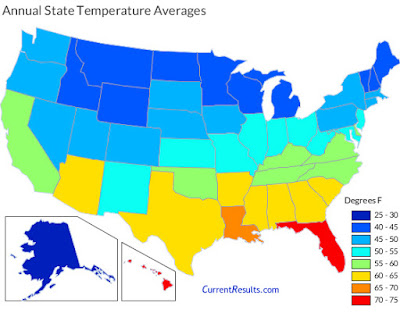 According to this chart, the "ideal" temperature slants across the USA from New Jersey to New Mexico. I'm a little surprised at New Mexico, but I guess having a lot of mountains makes up for being in the desert Southwest. According to this Florida and Hawaii (#1 and #2) should be horrible places and people should be emigrating in droves and Texas should not be the most productive state.
Posted by Fritz at 8:00 AM