Campus Feminists and the Rape Shortage


. . . Is it really “happening”? Is there a “campus rape epidemic” to such an extent that 1-in-5 college women are victimized? If so, then we would expect that the sexual assault “awareness” efforts of feminists, augmented by the enforcement authority of the federal Department of Education and a White House Task Force, would bring these cases to light and confirm those “national statistics” of which Ms. Stenger spoke. The reports at SUNY-Albany are clearly insufficient, as Ashe Schow of the Washington Examiner explains:


. . . In the past year, Albany had 28 reports of sexual assault, twice as many as it had before Stenger opened her advocacy center. . . .
For the record, those 28 reports don’t break down to what alarmist national statistics say they should.
“Nine of them were from students who asked the university not to take action. Six resulted in disciplinary proceedings that led to two student expulsions and one persona non grata order against a nonstudent,” the [Albany, N.Y.] Times Union reported. “Six were from third parties (when reached, the alleged victims either denied any violence occurred or declined to speak). Four involved assailants whose identities were unknown. Three were outside the university’s jurisdiction.”

In other words, Ms. Stenger’s official “advocacy” resulted in a doubling in the number of sexual assault reports, but only five of those 28 reports (18%) warranted disciplinary proceedings against students, with a sixth disciplinary case involving a non-student. SUNY-Albany expelled exactlytwo students, out of a total campus population of more than 17,000, for sexual misconduct. Certainly, the situation at SUNY-Albany does not confirm feminist claims of a “campus rape epidemic” victimizing 1-of-5 female students, nor can any college or university in the country produce such documented confirmation.

Feminists invented a non-existent “crisis” for political reasons — perhaps hoping to use these claims to generate campus support for Hillary.

So what's the problem with too few campus rapes? You can't get enough interest in imposing your new regime.

When you can't find enough actual crimes to report, just Move the Goalposts: What Feminist ‘Rape Culture’ Discourse Is About 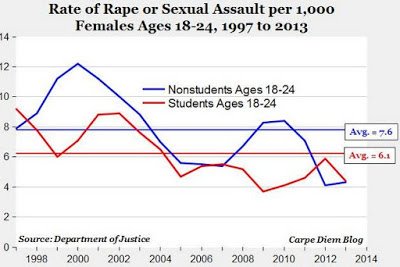 American women are now less at risk of rape than at any time in the past 40 years, and the emergence of a frantic hysteria about “rape culture” on college campuses therefore seems contradictory — unless you understand how feminist theory “problematizes” heterosexuality.

What Filipovic describes as feminist “disenchantment with the ‘No means no’ framework” amounts to an admission that the recent rhetorical fury about “rape culture” is actually an attempt to move the goalposts, in such a way as to criminalize normal male sexual behavior. The confusion created by so-called “affirmative consent” policies (also known as “yes means yes”) is understandable because most people would be shocked senseless if they stopped to consider what it actually means. Under the rules of “affirmative consent,” any attempt by a male to initiate sexual activity with a female, under any circumstances, is presumed to be sexual assault if she says it was. If a man and a woman have any sexual contact whatsoever — a kiss, a hug, anything — and she subsequently claims this contact was “unwanted,” “unwelcome” or “coerced,” then he is presumed guilty of sexual assault.

Because “normal human interaction is now being redefined as sexual assault,” as Ashe Schow of the Washington Examiner has explained of the current climate on campus, male students “need to stop viewing sex merely as pleasure or as an expression of affection or love, and begin seeing it as a potentially life-ruining moment.” Stripped of due-process rights in Title IX procedures, so that he has no protection against false accusations, any male who is sexually active on campus exposes himself to destruction, as Schow writes:

The "1 in 5" statistic is one of those factoids like the "97% consensus among scientists on global warming". Manufacture by bad and deliberately misleading "science", specifically for the purpose misleading the public into thinking there's a problem that doesn't exist, in order to impose your "solution", which is always more government regulation and greater authority and power for the people making the claim.