Is Man the Boxing Ape? 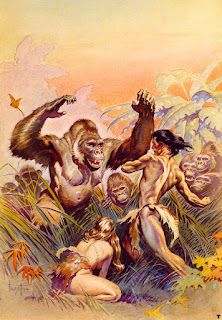 I saw this the other day: Human fist evolved to punch, new study says

Were human hands built for punching? A new study of cadaver arms suggests this may be the case.

By using the arms to hit a dumbbell three different ways, scientists determined that a clenched fist makes it much safer to serve someone a knuckle sandwich.

The findings, published this week in the Journal of Experimental Biology, bolster a controversial theory that ties human physiology to a violent past.

Compared with primates such as chimpanzees, humans have developed a very different hand structure that features a shorter palm, shorter fingers and a relatively longer thumb. The conventional wisdom holds that our hands evolved for more dexterity, allowing our ancestors to wield and manipulate tools.

“There’s every reason to believe that,” said David Carrier, a comparative physiologist at the University of Utah.

However, Carrier and his colleagues have put forth another, perhaps complementary, idea. They posit that as the human hand was becoming more delicate, it may have evolved into just the right shape to fit into a fist — all the better for punching opponents without accidentally breaking one’s bones. 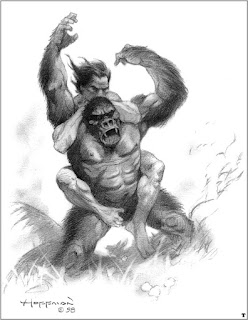 And I remembered this, which I failed to blog back in 2014:  Male faces 'buttressed against punches' by evolution


A new theory suggests that our male ancestors evolved beefy facial features as a defence against fist fights.

The bones most commonly broken in human punch-ups also gained the most strength in early "hominin" evolution.

They are also the bones that show most divergence between males and females.

The paper, in the journal Biological Reviews, argues that the reinforcements evolved amid fighting over females and resources, suggesting that violence drove key evolutionary changes.

For many years, this extra strength was seen as an adaptation to a tough diet including nuts, seeds and grasses. But more recent findings, examining the wear pattern and carbon isotopes in australopith teeth, have cast some doubt on this "feeding hypothesis".

"In fact, [the australopith] boisei, the 'nutcracker man', was probably eating fruit," said Prof David Carrier, the new theory's lead author and an evolutionary biologist at the University of Utah.

"Jaws are one of the most frequent bones to break - and it's not the end of the world now, because we have surgeons, we have modern medicine," Prof Carrier explained. "But four million years ago, if you broke your jaw, it was probably a fatal injury. You wouldn't be able to chew food... You'd just starve to death."

The jaw, cheek, eye and nose structures that most commonly come to grief in modern fist fights were also the most protected by evolutionary changes seen in the australopiths.
Furthermore, these are the bones that show the most differences between men and women, as well as between our male and female forebears. That is how you would expect defensive armour to evolve, Prof Carrier points out.

My guess is that tool using, which in some primitive form is still used by Chimpanzees, put a lot of selective pressure on hands, making them stronger and more able as "smashing" weapons, which in turn, encouraged their use and subjected them to more evolutionary pressure to perfect them as bare weapons (which is not to say primitive people wouldn't use weapons at hand on their fellows). This, in turn, put on evolutionary pressure to make the face more robust.

But we're all just bullshitting about this. . .

Wombat-socho has "Rule 5 Sunday: Just What It Says On The Label" ready at The Other McCain to fulfill any Rule 5 needs I might have missed.
Posted by Fritz at 6:00 AM