The Sum of All Clinton.com Fears

After the reasoned analysis of the sHillsters Benghazi Committe appearance, the emotional reactions start to appear.


. . . That's right, folks, the woman who wants to be president of all Americans made sure to let us know that she considers members of the other main political party in this two party system "enemies." And it's fairly clear from her past pronouncements that it's not just registered Republicans who make her stomach turn and her trigger finger itchy. Hillary hates all conservatives, charter members of the vast right-wing conspiracy that forced her husband to be serviced in the Oval Office and then lie about it.

Hillary's supporters dismiss the whole "Bill Had Sex and Hillary Looked the Other Way" argument as ancient history, and it kind of is. In fact, Bill has rebranded himself as a lovable elder statesman who can reach across the aisle (which he does quite well since he has a lot of experience reaching for things). 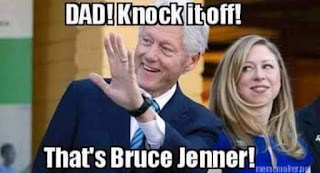 But Hillary is an angry woman, scarred by past criticism and with a taste for vengeance that makes Michael Corleone look like Pope Francis. She does not forget even the slightest offense, and stores it away in that ENIAC mind of hers until it can be downloaded and used to take out the enemy. And believe me, the opposition carries the same passport that she does.

Basically, it amounts to anyone who stands in her way to the White House. Hillary and her minions, wandering in the electoral desert these last eight years (after having snatched defeat from the jaws of Hope and Change) have had a lot of time to figure out a comeback strategy. Becoming secretary of state, one who presided over the murder of an ambassador and four Americans who tried to save him, was an unfortunate yet insignificant detour in the master plan. As I watched her respond to questioning from members of the congressional committee investigating Benghazi, she seemed almost annoyed that people were still interested in the death of Ambassador Stevens. You could see the thought bubble appear above her head: "Really, don't you people have some Planned Parenthood clinics you need to bomb?" . . . 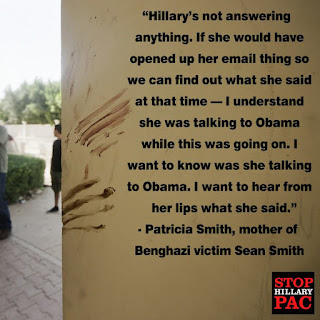 Add one more to the ‘hill’ of lies


The postmortems on the Benghazi hearing note the emergence of one significant fresh item. It involves Hillary Clinton’s immediate view of the terror attack on Sept. 11, 2012.

“Two of our officers were killed in Benghazi by an Al Queda-like [sic] group,” she wrote to daughter Chelsea that same night, according to an e-mail Republicans released. Other released documents show she drew the same conclusions to a Libyan official and to an Egyptian official the next day.

Yet publicly, Clinton joined the White House chorus claiming the attack was a spontaneous reaction to an anti-Muslim video.

Technically, the new evidence doesn’t break new ground. It merely confirms she is a liar who will say anything to advance her career.

We already knew that, didn’t we? 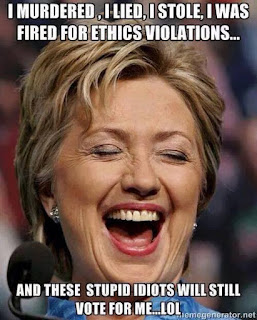 The Sum of All Fears:  I Hate to Say This But... Hillary Will Be Our Next President


. . . After watching Hillary’s Oscar winning performance last Thursday before The House Select Committee On Benghazi, I’m now completely convinced that Hillary could stand naked on the smoldering carcass of Chris Stevens while smoking a fat Bob Marley-sized joint, as she screamed aloud the contents of Mein Kampf, and the Left would hail her a Warrior Poet. She’s the new Lizard King … she can do anything.

Matter of fact, if I were Satan, I’d start sweating my crimson butt off because The Hildebeest made the Serpent of Old look like a clunky, overly honest used-car salesmen. Our Faust is female, y’all.

Not one person and not one question rattled Hillary. As in no one. As in nada, nothing, zilch, zero, zippo got under her wrinkled, Bill-averse flesh. Bow and kiss the ring, peeps, and meet the new boss, same as the old boss.

Hillary’s flawless and skillful execution wasn't because she was telling the truth -- because she wasn’t. She knew she was peddling lies and everyone and their iguana knew that she was stretching the truth through her Frito Pie-hole. But it didn’t/doesn’t matter because she did it with such amazing precision. And that’s all that matters in our unfortunate day; namely, an adept ability to con abecedarian Americans. . . .

And not one, but two contributions from Smitty at The Other McCain!: Her Majesty Addresseth The Rancid Peasantry In The Royal Quotidian Mode


Hinderaker over at PowerLine seems to confuse Her Majesty’s non-command of reasonable, accurate speech with lying.

The NRA basically represents manufactures and the sellers.

No, the NRA represents firearm owners and others who want to preserve our constitutional rights. And, by the way, the NRA’s approval rating is 50% higher than Hillary’s.

One of the most outrageous votes that I ever had to take when I was in the Senate was an NRA bill to give immunity to gun manufacturers and sellers for just about everything.

She is talking about the Protection of Lawful Commerce in Arms Act. It doesn’t give immunity to gun manufacturers for “just about everything,” but rather, subject to various exceptions, for “the criminal or unlawful misuse of a [firearm].” So if a criminal shoots you with a Ruger pistol, you can’t sue Ruger.

It was unique. No other industry in America has anything like it.

Liberals haven’t threatened to bankrupt any other industry by bringing frivolous lawsuits. If someone hits you with a baseball bat, you can’t sue Louisville Slugger. If you try, you will be laughed out of court. The law with respect to guns is the same as with regard to other products: if a gun is defective and you are injured as a result, you can sue.

Read in full. And understand that next year, we’re past all discussion of whether “this is the most important election of your lifetime”. If Her Majesty achieves the Full Coronation, it’s not clear whether there will beanother election.