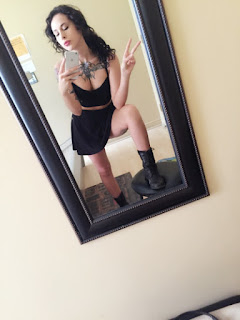 She describes herself on Tumblr as an “economics student” and “vegan bi sexworker” who is “neurodivergent,” which may or may not be a synonym for crazy. She lists her diagnoses as GAD (generalized anxiety disorder), OCD (obsessive compulsive disorder) and MDD (major depressive disaorder), although elsewhere she also lists BPD (borderline personality disorder). She is a one-woman DSM, basically — a living catalog of psychiatric symptoms. Here, let’s consult Wikipedia:


There is a neurodiversity movement, which is an international civil rights movement that has the autism rights movement as its most influential submovement. This movement frames autism, bipolarity and other neurotypes as a natural human variation rather than a pathology or disorder, and its advocates reject the idea that neurological differences need to be (or can be) cured, as they believe them to be authentic forms of human diversity, self-expression, and being.

In order words, these people aren’t crazy, they’re just “diverse,” and it isoppressive — a violation of their civil rights — to expect these kooks to behave like normal people. They are certified Special Snowflakes™ and how dare you judge them? Society must accept these “authentic forms of human diversity,” and if their “self-expression” takes the form of becoming tattoo-covered bisexual prostitutes posting nude selfies all over their Tumblr blog, only a hateful and intolerant bigot would criticize this “neurodivergent” behavior.

Normal (“neurotypical”) people can never criticize the neurodivergent Special Snowflake™ but she is always free to criticize us:


Women Are Doing Something That Isn’t CateredTo My Sexual Arousal and I Am Afraid:A Tale for the Modern Heterosexual Male

What was she referencing by this? We don’t know. However, notice that she attributes fear to “the Modern Heterosexual Male.” The neurodivergent are qualified to diagnose the shortcomings of others. She has anxiety and depression, and this qualifies her to assert that normal men are afflicted by fear of women. Feminist Tumblr is full of women like this, who proudly list their mental illnesses in their profiles — thus to establish their credibility as victims of society — and who then proceed to identify the various failures of normal people.
. . .
Once you recognize the influence of mental illness in shaping feminist ideology, you find yourself nodding in agreement with Professor Glenn Reynolds: “I’m beginning to think that most lefty movements are just about broken people trying to manipulate the rest of us so they can feel good about their broken selves.”

But, alas, it's more than merely wanting to feel good about being crazy, it's also about gaining power to dictate acceptance and the embrace of their particular version of deviancy. They may be crazy, but their not stupid.

And they want to change the rules of engagement, as witness the "affirmative consent" rules being promulgated at colleges through the agitation of a small number of feminists in government and academe. 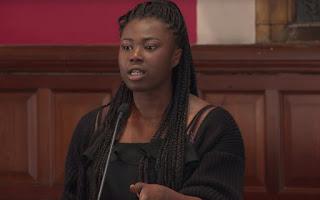 And in the "hoist on her own petard" department, a black lesbian leader at Oxford University was forced to denounce her own behavior in a relationship for lack of affirmative consent:


Teriba came forward last Friday and made a very public and yet somewhat confusing confession of sexual misconduct.

She posted on Facebook—with a polite trigger warning, no less—that she had committed a non-consensual sex act and, therefore, would be resigning from her many positions of leadership at Oxford:

“I failed to properly establish consent before every act. I apologize sincerely and profoundly for my actions. I should have taken sufficient steps to ensure that everything I did was consensual. I should have been more attentive to the person’s body language. In failing to clarify that the person consented to our entire encounter, I have caused serious irreparable harm.”

Teriba has since deleted her Facebook profile, and she has not responded to The Daily Beast’s efforts to contact her. However, the text of her confessional resignation has been widely circulated.

I'm curious whether this is real, or is a "false flag" operation, designed to show this policy will apply to all, when in fact, it will apply almost exclusively to straight men who face "regret is rape" actions after the fact.

The lesson is that we don't let the inmates run the asylum.