Shocking News from the James River 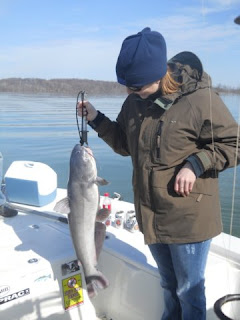 
For years, George Trice watched as blue catfish numbers on the James River grew, while his blue crab catches dwindled.

Of course, Blue Crab harvests in places in the Bay not affected by Blue Catfish have also been poor in recent years, so it might be a coincidence.


The James is filled with huge numbers of catfish that are “eating the whole river up” including the crabs, the Poquoson-based waterman said.

So Trice, as he puts it, is working to get even. He does that by sticking two electrodes into the river and sending a low-frequency electric jolt through the water.

All around, stunned blue catfish pop to the surface, and Trice and his crew dip them out of the water in almost unfathomable numbers. His catches can routinely hit 6,000 pounds a day. “The only limiting factor is what the truck will carry away,” Trice said.

Last year, he caught 170,000 pounds of blue catfish, and he expected to more than double that to 400,000 pounds by the time he pulls his electrodes out of the water in early October. 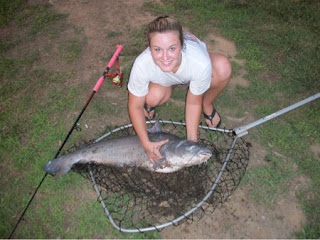 That's a bunch of fish. I helped land 500 lbs of fish the other day, and my hands still smell.


Electrofishing isn’t a normal method of commercial harvest, but Trice has a research permit from the Virginia Marine Resources Commission and is working with scientists from the Virginia Commonwealth University and the Virginia Institute of Marine Science to determine the potential of the technique to help control the rampant population of nonnative blue catfish. A grant from Virginia Sea Grant helped him purchase the equipment.

Sports anglers and charter guides like my friend Capt. Mike Starrett are not necessarily in favor of a project to try to eliminate the Blue Cat.

There may be some other interests as well. While it is claimed the low frequency electrofishing is fairly selective for catfish, other species may affected as well. 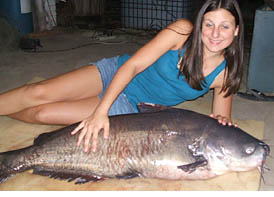 Greenlee, though, said it’s not clear that electrofishing itself isn’t causing a problem, or that only catfish are affected. During thier (sic) own work, he said, DGIF biologists have observed other species affected by low frequence (sic) electrofishing, including longnose gar, common carp and gizzard shad.

Even if it did not harm a sturgeon directly, he said, it could have other impacts, such as causing them to abandon a spawning run.

I'm not worried about gar, carp (itself an introduced species) and gizzard shad, but bringing back the Sturgeon should trump eliminating the Blue Catfish.

Wombat-socho has "Rule 5 Sunday: Pre-Halloween Pinups" up at The Other McCain.
Posted by Fritz at 3:44 PM