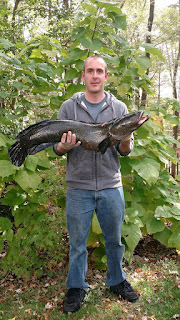 
An Upper Marlboro man has set a record in Maryland after catching a 17-pound northern snakehead fish.

Michael Meade caught the fish with a bow and arrow in the marshes of Mattawoman Creek on Oct. 16. Meade says he weighed the fish on a bathroom scale when he got home and discovered it was over 17 pounds.

“It was about 10:30 at night when I brought it onboard, and it was the biggest snakehead I had ever seen,” Meade told the Maryland Department of Natural Resources. “When I got home, I stepped on a bathroom scale with the fish, and it was over 17 pounds. So, I put it in a bucket of ice water and went looking for a certified scale.”

The next day, he took it to the Gray Brothers Market Store in Marbury where he had its weight confirmed by a certified scale.

However, my snakehead fishing buddy Capt. Mike Starrett claims to have caught two larger in Maryland waters, 17.5 and 18.3 lbs on hook and line, which were "released by accident."
Posted by Fritz at 5:00 AM