Halloween approaches, and a coven of Canadian witches have brought their dark and ungodly evil to sunny Southern California:


ONE National Gay & Lesbian Archives has organized “KillJoy’s Kastle,” a “Lesbian Feminist haunted house.” ONE National Gay & Lesbian Archives is a part of the University of Southern California’s Libraries.
“Lesbian Rule. Forget the dead this Halloween. Feel the pulsing throb of something larger than life in KillJoy’s Kastle,” reads USC’s website.
KillJoy’s Kastle will be a “sex positive, trans inclusive, queer lesbian-feminist-fear-fighting celebration,” put together byToronto based-artists Deirdre Logue and Allyson Mitchelland organized by “ONE Archives in West Hollywood.” 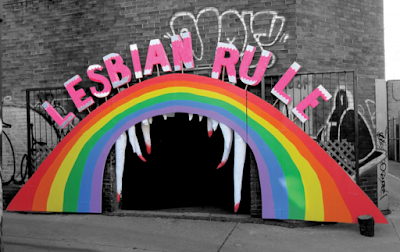 “This haunted house of freaky feminist skill sharing and paranormal consciousness-raising reanimates the archive of lesbian herstory with all its wonders and thorny complications,” they explain. “Expect horror.”
“Dare to be scared by gender-queer apparitions,” it continues, “ball-busting butches, and never-married, happy-as-hell spinsters.. . . . Each evening of nightmarishly non-assimilated lesbian mayhem will include multiple live performances from a spirited group of international and local weirdos.”

Lions and tigers and bears, oh my!


This is what feminism means in 2015, sponsored by an elite private university (annual tuition at USC is $50,210) and promoted by those “mainstream” feminists at Huffington Post:


A large part of the performer-driven space is audience interaction. In other contexts, this might mean having teenagers in monster masks snarling at you for a cheap scare, but at KillJoy’s Kastle, you participate in myriad ways — from the physical to the more cerebral.
You might punch a bag emblazoned with the word “capitalism” on it. Or you might take a shot of liquor from a witch’s fake penis.

Wow, punching a bag labeled "capitalism"; how transgressive (yawn). Kids these days.  Where's Dean Wormer when you really need him?