A Brief Stroll in the Garden 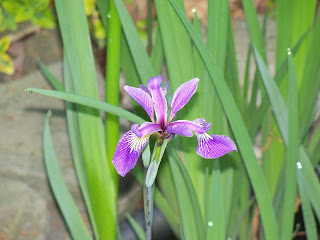 The Irises in the pond are blooming. We have 4 pots of iris that take up most of our tiny outdoor pond, two of Blue Flag Iris (at right) and two of Yellow Flag Iris. (below).  Blue Flags are native, and gave their name to the park down the road, Flag Ponds Park.  Both are wetland plants and will grow happily with their roots submerged in several inches of water, although they will also grow well out of water in damp areas. 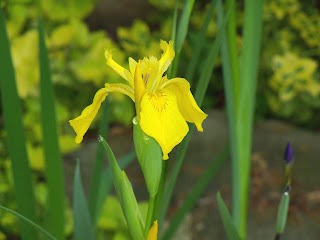 The yellows are a bit more robust than the blues, and start to bloom a bit earlier.  After the finish blooming, we should fish out the pots, divide them up to thin the pots, give them fresh soil and start some more for someone else.  That way they get a good shot at refilling the pot, and having a good set of blooms next year.  It could happen. Yellows are considered an invasive species, and so should not be let loose (although, it's clearly too late around here). We started these from tubers collected in a small swamp nearby. 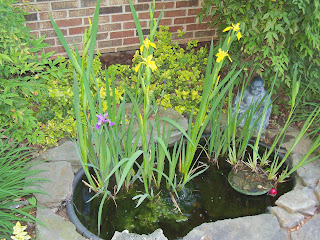 Our tiny pond on the right (a 50 gallon stock watering trough bought at the local feed store).  A Happy Buddha sits under a Nandina, and ceramic alligator loiters at the bottom of the photo.  He does not deter the frogs, one of which can be barely glimpsed in the pot on the right. 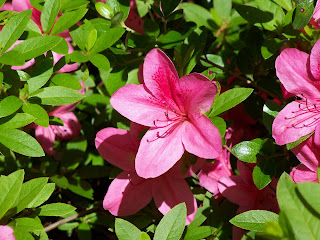 Our Azaleas are going great guns (those that survived) we lost a couple this year, and replaced them with Camellias.  We'll see how that works out. 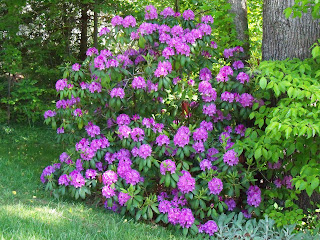 Likewise, our big Rhododendron, given to us as a housewarming gift 20  years or so ago. 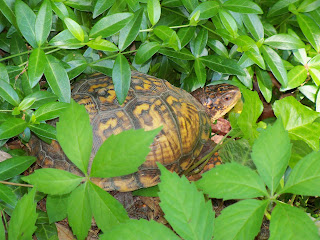 I found Eastern Box Turtle this hiding in the side yard, which is barely civilized, with some Vinca, and a few Azaleas competing for sun with the native brush.  Given the brown eyes, this one is likely a female.  She'll be fine, provided she stays off the roads. 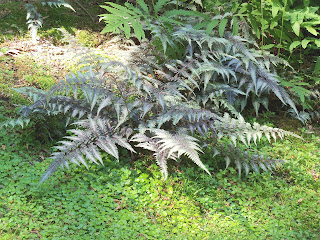 Some Japanese Painted Fern that we have in some of the shady areas.  It was named Perennial of the Year in 2004 (So who names plants "perennial of the year' anyway?).  We also have native ferns in various shady spots, including Sensitive Fern (seen behind), Christmas Fern, Cinnamon Fern, and Royal Fern.  Ferns are great in the shady spots. 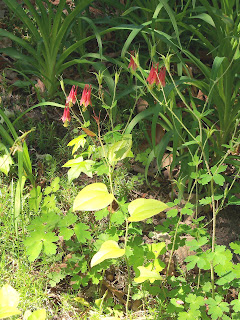 We have lots of Eastern Columbines scattered about as well.  We originally found them near a ruined house in the wood.  They transplant well (although you seldom save the flowers, which are brittle), and they spread by seed quite readily. 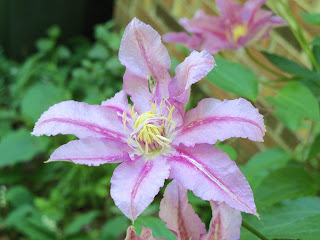 This non-native Clematis decorates the home made fence that keeps Sky in.  We have a native Clematis, but it's a late summer/fall bloomer.
Posted by Fritz at 2:38 PM

Email ThisBlogThis!Share to TwitterShare to FacebookShare to Pinterest
Labels: flowers, Me, photography, wildlife