Yep, The World is Still Here 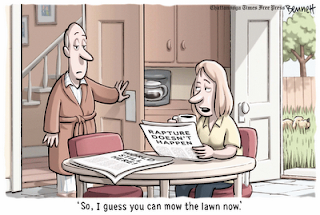 About the only news that seems to be going on is that the world appears to have survived "The Rapture" that was predicted by radio evangelist, Harold Camping.  This of course, is hysterically funny as the world has survived perhaps 1,000 or more past Judgment Day threats in the past.

However, the glee in the media seems a bit over the top to me.   As noted by Ann Althouse:


The big news is that big news covered the nonnews. We were supposed to find it amusing. Amusing to snicker at marginal people who believe religious things. They're so dumb. We're so smart. No, you're not. You are part of the system of dumbness you purport to report. 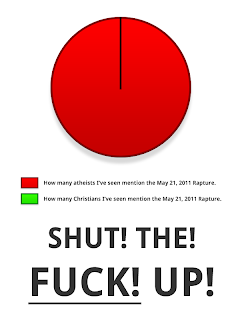 While I'm not religious, the whole thing has seemed to be swung as a club against the religious Christians in the country (and by extension, the Christian Right), the vast majority of whom had absolutely no part in the 2011 rapture frenzy. Do I agree with the their religious beliefs? No. Do I need to carp at them about? Nope

Now why don't they discuss the failure of Keynesian economics to fix the economy, instead?  Far more people have faith in that than had faith in the 2011 Rapture.
Posted by Fritz at 2:05 PM