Threatened by the dams, shad may get a reprieve because the dams are up for relicensing.


...In recent years, the silvery shad that Native Americans used to teach European settlers how to fertilize crops, that helped feed George Washington’s Continental Army, and that provide food to eagles and otters, have started to disappear in alarming numbers. The disappearance has started talk of extinction, mostly because of four giant dams that block the Susquehanna River in Pennsylvania, where the fish were once abundant, according to the U.S. Fish and Wildlife Service.

Biologists say there’s one ray of hope for efforts to restore the Susquehanna’s shad — the looming expiration of operating licenses for two of the dams. Before granting a 30-year renewal, the Federal Energy Regulatory Commission requires the dam operators to study the environmental effects of their facilities. Based on the findings, the commission can require that conditions be greatly improved so that more shad can swim past them...

This is more than fair.  The dams have a major impact on a major fish species, and they should make all reasonable effort to accommodate the passage of the shad up to their spawning grounds.


The commission confirmed in a statement that two dams, the Conowingo Hydroelectric Plant, built in 1928 and run by Exelon Power, and the York Haven Hydroelectric Dam, built in 1910 and run by York Haven Power, are in the “pre-filing state of the relicensing process,” meaning they must conduct environmental impact studies of the shad and other species affected by the plants. A decision is a ways off, with release of the studies, critiques and public comments pending over the next three years. 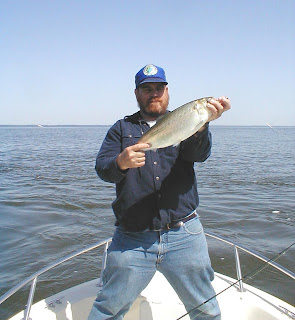 I don't have much experience with shad fishing myself.  Once in a great while, a few stop by the power plant and hang around the discharge, and I get luck and catch one (see right).  I keep thinking I'll go up to Deer Creek or Fletchers Landing some day for some serious shad fishing, but I haven't gotten around to it yet.  Maybe next year.

I'm kind of surprised they're willing to file to relicense Conowingo Dam.  Ever since I arrived in Maryland in 1985, there has been talk about how the reservoir was rapidly filling with sediments and would soon reach the end of it's useful life.  But according to this article, they are considering plans for dredging the reservoir.  Where the hack will they dump all that sediment?  I guess they could take it back and put it on farm fields in Pennsylvania, where most of it came from.

Shad were introduced from the East Coast, to the Columbia River in the Pacific Northwest, where they are doing quite nicely, despite the fact that the Columbia is also heavily dammed.
Posted by Fritz at 7:15 PM