Species extinction rates have been overestimated


The most widely used methods for calculating species extinction rates are "fundamentally flawed" and overestimate extinction rates by as much as 160 percent, life scientists report May 19 in the journal Nature...

It's hard to say that no one has ever lost in science by exaggerating the importance of the problem they were studying, but off hand, I can't think of one.  Dramatic reports of problems draw media attention, and increase the probability of funding in that area.  When research comes out that calls the original scary headlines into question, you can always accuse the authors of being in bed with industry.

As pointed out by ProfessorBainbridge:


The point is not that we should ignore environmental concerns. The point is that we should be wary about claims that massive social and economic changes are necessary simply because the scientific consensus of the moment claims they're desirable. Like the medical claims about salt I mentioned in my earlier post, and like this latest news, the consensus of the moment can turn out to be seriously flawed. 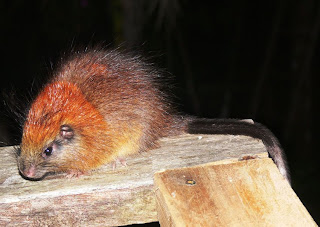 In other extinction news, the  "Magnificent Red-Crested Tree Rat" (Santamartamys rufodorsalis), a Guinea Pig sized rodent last seen in Columbia in 1898, was found begging for dinner at an "ecolodge" there.  It hung around for two hour begging for treats and being photographed, until it decided to disappear for another century or so.
Posted by Fritz at 4:12 PM