Could the Underpants Gnomes Save Tangier Island?

How odd old accent could save Tangier: Director sees the dialect as opportunity to protect island


What could save Tangier from eroding into the Chesapeake Bay is Shakespeare.

That's according to a New York City man who is bent on replicating the island's unique dialect to present plays the way audiences heard them during the Bard of Avon's lifetime.

Actor and director Hamilton Meadows, 65, spent three weeks on Tangier in his quest to hear English spoken as Shakespeare's contemporaries would have uttered it.

Meadows filmed footage for a documentary he is producing about the idea that Shakespeare's plays ought to be enacted using what scholars call "original pronunciation," or OP, which is said to be a combination of the Cornwall accent of Tangiermen's ancestors and a Southern Irish component.

Despite a somewhat quizzical reception by Tangier residents, Meadows is convinced their speech pattern is a priceless cultural asset with potential to save the island.

"They have such an opportunity here to do a Tangier Island Shakespeare festival every summer -- and make money, too," said Meadows, pointing out an abandoned store for sale on Main Ridge Road, which he said could be transformed into a 100-seat theater.

He continued with a revivalist's fervor: "People would come just to hear Shakespeare, just like I want to do it -- I want to hear it, I want to see it the way it was done in 1600. And there are millions of people around the world who feel just like I do. Then they will put the breakwater up; if they do a Shakespeare festival, it will get built, because the world will demand it."

Several federal projects designed to protect Tangier have been in the works for years, some since the mid-1990s, but have not been funded. One would construct a 430-foot jetty from the north shore and another 50-foot jetty off the south shore to protect the harbor, at a cost of $3.6 million. Another would build breakwaters along the western and northern sides of the island.

Not that I think a Shakespeare festival on Tangier Island is a bad idea, heck, I might even try to go, but I think this as a plan to complete the breakwater and "save" the island makes about as much sense as South Parks Underpants Gnome:

The Underpants Gnomes are businessmen of sorts, and they claim to know a lot about corporations, so the boys eagerly ply them for answers.
The Gnomes explain that their three phase business plan is as follows: 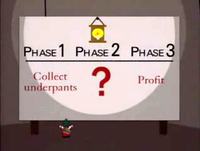