Striped Bass Population May Be Wavering 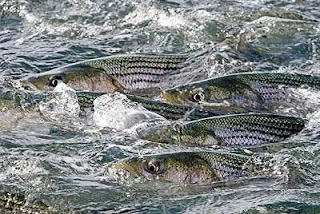 I've noted before that Chesapeake Bay recreational Striper fishermen have noted what we believe to be signs of the decline of the fish in Chesapeake Bay over the past several years.  The Atlantic States Marine Fisheries Commission (ASMFC) has acknowledged that sampling has shown that to be true, and moved to restrict the take of Stripers.  This article from the East Hampton Star on New York's Long Island notes that fishermen in the Northeast have also noted a recent dearth of Striped Bass:

From the mid-1990s when bass populations were placed under strict regulatory control to about 2006, a peak of abundance, all was right with the world as defined by those whose lives revolved around them for sport or money. But, for the past several years there have been whispers among fishermen, and they’re growing louder: There don’t seem to be as many bass around. The farther east one looks, the more profound the sense.

The Vineyard Gazette, a venerable broadsheet that pays close attention to the bass beat, ran a banner earlier this month that read: “Scary Decline in Striper Stocks.”
The paper reported that last year’s springtime sea worm hatch in the island’s coastal ponds — “an event that historically attracts stripers by the thousands — had just about failed after years of under-performance.” The Massachusetts division of marine fisheries has seen a 75-percent drop in the catch of small stripers in the past four years.

For the past two, the SurfMasters surfcasting tournament with contenders among the more expert casters found anywhere on the coast, has had to make do with shorter and shorter periods during which 30 to 50-pound fish get within range. A noticeable downturn.

“Last year, it never rose to a high note. It happened for about two days, a short period. Last year and the previous year were two of the worst in the past decade. Very little action. If you caught a 20-pounder it was something special,” said Fred Kalkstein, one of the SurfMaster tournament’s annual organizers.

“The recreational harvest has been down coastwide for the past several years,” said Stephen Hines, the New York State Department of Environmental Conservation’s section head for finfish and crustaceans. Mr. Hines said the commercial bass fishery had remained more consistent, perhaps because of its “individual quota system.” Specific numbers of tags allocated to each licensed fisherman tend to impose stricter catch limits.

Time to start choking back the harvest even more than we have already.  When you're trying harder and  catching less, you're beyond the point of sustainable yield.  If we want to keep them at all, we'll need to keep less of them.
Posted by Fritz at 7:05 PM

Email ThisBlogThis!Share to TwitterShare to FacebookShare to Pinterest
Labels: fishing