My, What Big Eyes You Have! 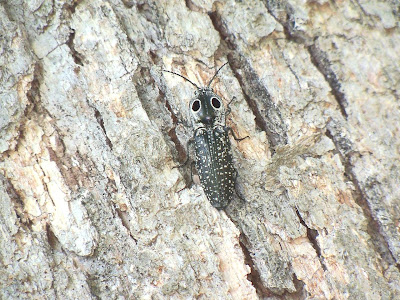 I found this out in the garden today, walking around on one of our big White Oak trees.  I don't know what it's called, but something with "eyed" would be appropriate.  I was gonna write a little about how eyes make it look like a potential predator, but then I checked:


The eyespots on the wings of butterflies and moths are intended to be conspicuous to predators, not to resemble the eyes of larger animals, a new study found. "The story often goes that eyespots on butterflies and moths will startle or intimidate their predators by resembling the eyes of their predator's own enemies," said study lead author Martin Stevens, a behavioral ecologist at University of Cambridge in England. But with no experimental evidence to support this 150-year-old belief, Stevens and his colleagues put the theory to the test...Large bars and squares placed on the waterproof paper wings of the experiments provided as much protection as circles—and the larger the marking, the less it was preyed upon. Likewise, the more the insect spots were on the wing, the less birds attacked them.

The authors concluded that the visual "loudness" of the markings startle or frighten the predator into avoiding spotted prey.

Tom Sherratt, an evolutionary ecologist at Carleton University in Ottawa, Canada, was not involved in the study.

"It does seem very likely, based on [the new] work, that it's the conspicuousness of the signal [that] is more of a deterrent than anything to do with it resembling an eye," he said.

Worked with me.  Anything that advertises it's presence like that may be something I don't want to tangle with.