What Nemo Didn't Know Was Coming...

...probably wouldn't have upset him.

There's been a little furor in the media recently about a program in the San Francisco Bay area (natch) to teach kids lessons about tolerating alternative sexual lifestyles using examples of what we humans might regard as odd sexual practices among animals.  The example being put forth are clownfish, a large group of tropical fish in the tropics which mature first as males, and which then may switch to female if no larger female is present.  Nemo the Disney cartoon star was modeled after a clown fish.


Redwood Heights Elementary School, in Oakland, is in the hot-seat after the school decided to educate students about gender diversity.

On Monday and Tuesday, students of every grade were taught what the school called age-appropriate lessons about gender differences. Some lessons included all-girl geckos, a transgender clownfish, and boy snakes who act "girly" reports the San Francisco Chronicle.

"That's a lot of variation in nature," Gender Spectrum trainer, Joel Baum, told the students. "Evolution comes up with some pretty funny ways for animals to reproduce."

Principal Sara Stone said the lesson on gender differences was part of a larger effort to control bullying in the school, something parents supported last year. 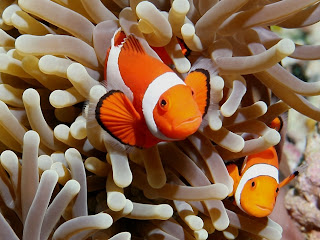 
The Pacific Justice Institute, a conservative organization, said teaching children that there may be more than two genders, "does not represent the values of the majority of families in Oakland,"

Students at Redwood Heights Elementary School in Oakland, Calif. have learned a valuable lesson in gender diversity after Joel Baum, director of education and training for Gender Spectrum, introduced lessons on transgender clownish and single-sex geckos.

I think odd animals are a lousy way to teach kids about human sexuality, especially from an anti-bullying perspective because every where you look around the animal kingdom, including the sex swapping clown fish, animals are involved in violent behaviors for sex.  On second thought, maybe that's not such a bad lesson after all, but I don't think that was what they were trying to preach.

On the other hand, teaching about the various solutions that other animals have evolved to reproduce themselves is an excellent perspective from which to teach evolution.  If you really want to learn about how human sexuality developed, you might consider looking at now our nearest relatives in the animal kingdom, the great apes behave.  But you'd likely find them too violent to teach at an elementary school in San Francisco.
Posted by Fritz at 6:00 AM