So This Means You're In Favor of Nuclear Power, Right?

I am, of course, being sarcastic.  The Bay New de Jour has three articles today on new coal-fired power plant that is being considered to supply power in the region: 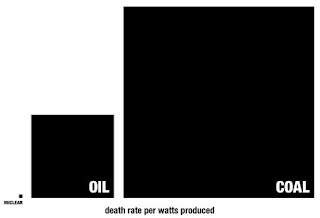 I'd be happier with their message if I thought they would favor the single form of power that could be instituted that could produce most or all of our power requirements if needed, nuclear.  Instead, they will, of course, continue to oppose nuclear power for reasons that I can only consider incomprehensible.  If health were what they really wanted to protect, there is nothing safer than nuclear:
But that's not really their goal. They're really opposed to all energy development, except maybe wind and solar (and then, wait until somebody tries to put that near their backyard).
Posted by Fritz at 7:13 PM