Almost everyone is aware of the horrible flooding in the Southern Mississippi Valley, and probably most were aware of the severe flooding of the Red River, at Fargo North Dakota, a situation which has faded from the news, but is still a serious ongoing problem:


FARGO – At this rate, Fargo’s spring flood may just stretch into summer.

Today marks the 62nd consecutive day the Red River here has been above flood stage, breaking the previous record of 61 days set in 2009.

Flood stage in Fargo is 18 feet. The river stood about 19.2 feet Saturday afternoon and is expected to remain above flood stage for at least another week, according to the National Weather Service.

The Red River spilled out of its banks on March 29 and crested at 38.75 feet on April 9, the fourth-highest flood on record in Fargo.

But there is another, slow motion, quiet flood going on in the United States this year, the flood of Lake Champlain, on the New York/Vermont Border, that I hadn't even heard of until doay:


Heavy snowmelt and the rainiest spring ever here have combined to send the lake to its highest levels on record. Hundreds of businesses, summer camps, cottages and year-round homes along the lake's New York and Vermont shores have been affected — to varying degrees — for more than a month.

Some 500 homes have been destroyed or damaged in Vermont, Gov. Peter Shumlin said earlier this month. No updated figures have been released.

No one has died. Everyone here is quick to acknowledge that the damages pale when compared with the carnage of Joplin, Mo., the tornado-stricken towns of Alabama and imperiled cities along the Mississippi River.

But this is a slow-moving catastrophe. And it has no end in sight. 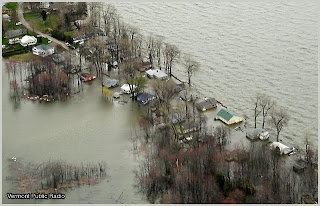 Is it just that we've reached our saturation point for flood coverage?


"We've had so many long duration rain events, it's built a large amount of water and it's gonna take a long time before it gets below flood stage," said Eric Evenson, a National Weather Service meteorologist in South Burlington. "Optimistically, it'll be another 40 days to get below flood stage, with normal conditions."