Chinese Dog Lovers Save 520 from Restaurant


The mutts were destined for the dinner table — all 520 of them crammed onto a truck hurtling down a Beijing highway toward awaiting restaurants in northeastern China.

Then, fate intervened in the form of a passing driver, an animal lover who spotted the truck and angrily forced it off the road. From there, things began spiraling out of control. News of the confrontation hit the Chinese blogosphere, sending more than 200 animal activists flocking immediately to the highway. Traffic on the road slowed to a standstill. Dozens of police officers were called in. Animal activists, however, kept arriving with reinforcements, carrying water, dog food, even trained veterinarians for a siege that lasted 15 hours... 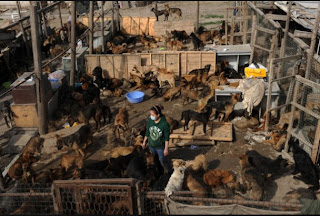 It's kind of funny how all cultures are equal, and worthy, until they cross one of our deeply held beliefs.  Mind you, I hold that belief.  Just not that all cultures are created equal.  People who respect dogs are better, IMHO.


...And the debate is the latest sign of China’s rapidly changing mores and culture. For centuries, dog meat has been coveted for its fragrant and unique flavor; it is an especially popular dish in the winter, when it is believed to keep you warm. But pet ownership has skyrocketed in recent years as China’s booming economy produced a burgeoning middle class with both money and time for four-legged friends. And with the new pet stores, a once powerless animal rights movement is slowly gaining traction.

Look at that, the more China develops and comes into the first world, the more they adopt our values.

The Post also has a slide show of the rescue: here.
Posted by Fritz at 7:41 AM