After the morning beach walk, and mowing the lawn, I went fishing.  Here is a panoramic view of the shore from about a mile out.

Despite the blue, the water is quite murky, apparently from an algae bloom caused by the recent flooding, and the nutrients brought into the bay.

Striper fishing was tough.  I got a few small ones.  But after working hard on that for a while, I gave up, and croaker fished.  I got a half a dozen croaker and one large white perch.

There was a lot of interest in fishing today.  There were easily 8-10 boats nearby at one point, and when I got back to the harbor, the jetty was alive with fishermen, probably catching croaker too: 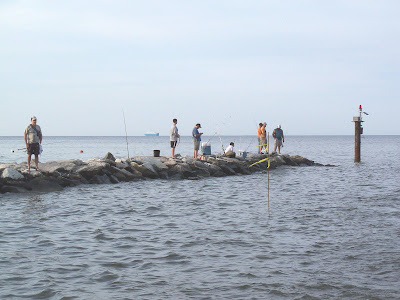 I came in early, and we had croaker for supper.
Posted by Fritz at 10:47 PM