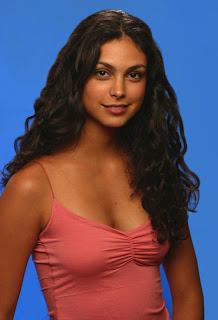 The subject of this weeks Rule 5 post is a woman who seems "condemned" to play hot Sci-fi chicks, Morena Baccarin.  Born in 1979 in Rio de Janiero, she moved to the New York with her parents at 7, where she seems to have set out almost immediately on a career in entertainment, studying at Fiorello H. LaGuardia High School of Music & Art and Performing Arts of "Fame" fame, before attending Julliard. 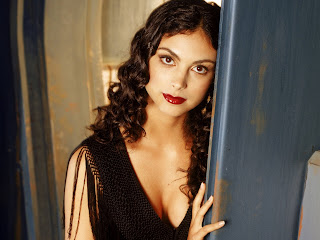 She has starred as a high class hooker courtesan Inara Serra in Joss Whedon's TV series "Firefly" (2002-2003), and it's big screen spinoff "Serenity" (2005), a role in which she mostly got to walk around in exotic clothes looking sexy, while everyone else either piloted space ships or shot people. Good casting, Joss. 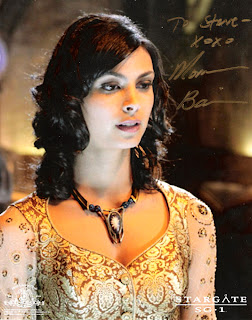 In 2005 and 2006, she played in 5 episodes of Stargate SG-1 as Adria, a wunderkind child of Vala Mal Doran, an alien of questionable morals, but a certain roguish charm (but bit bony for my taste).  She rapidly grows into the leader of the opposition team of the period, the Ori, a collection of priestly baddies with apparently magical spiritual powers.  Adria, of course, is the most powerful (and sexiest) of them all (OK, the priests were all old gray guys, so it wasn't a high bar).  She also played the same part in the direct to DVD movie sequel, "Stargate: Ark of Truth."

Here she is demonstrating some of those powers, getting burning mad at Mom... 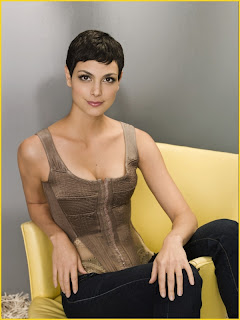 As Anna, the leader of the bad lizardoids disguised as humans in the remake of the TV series "V" (2009-2011), she was forced to wear short hair. I guess lizards aren't supposed to know the ins and outs of taking care of strictly mammalian features, although she showed plenty of those. 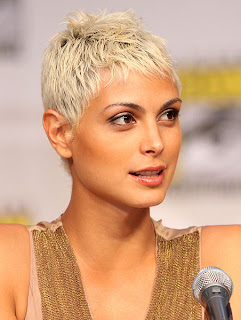 This picture, which graces her Wikipedia page, was taken in 2010 at a Comic Convention in San Diego, with short hair for her role in "V", dyed blond.  I prefer the brunette, but it still works.

She has also had numerous smaller roles in TV and films, so it looks like we'll continue to see her around for quite a while.  I'm good with that.

Maggie jumps back into the Rule 5 pool this week with her post on Cindy Crawford, who is campaigning for Mitt Romney and links my post, to boot! Thanks Maggie! And thanks to The Classic Liberal for his link. I'm also pleased that I have corrupted my little brother into posting Weekend Women #5. And of course (or is that coarse) to the Rule 5 Wombat at The Other McCain for his massive weekly rule 5 round up! Re-Linked at The Classic Liberal's Rule 5 compendium "Alice in Chains: Stone."
Posted by Fritz at 11:41 PM